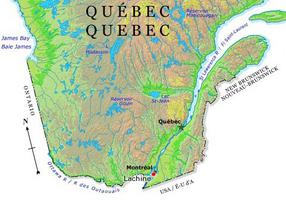 Lachine, Qué, City, pop 40 222 (2001c), 39 910 A (1996c), 35 266 (1991c), area 17.83 km2, inc 1907, is located on the south bank of Île de Montréal and forms part of the Montréal urban community. In 1669 Cavelier de la Salle travelled inland in search of China, whence the derisive nickname Lachine applied to his land grant, which he had received 2 years earlier. In 1689, during the Iroquois Wars, it was the site of a surprise attack by the Haudenosaunee (see Lachine Raid). Lachine remained the nerve centre in the Canadian fur trade for several decades, and the Hudson's Bay Company maintained a trading post there for many years.

The development of the Lachine Canal in the 1820s, the establishment of the Montreal and Lachine Railroad in 1847, and the expansion of the trucking business in the 20th century gave Lachine a major role in the trade network extending to southwestern Canada and the US. The town's industrialization, one of the most rapid in Canada, attracted a large working-class population. Its economy is dominated by steel plants and by the electrical appliance and electronics industries.