Lake St. Clair has a relatively small area and depth in comparison to the nearby Great Lakes. For example, it would take over 2,900 Lake St. Clairs to fill Lake Superior (the largest of the Great Lakes). Due to its shallow nature, water passes through the lake relatively quickly, taking roughly 5 to 7 days to flow through from its primary source, the St. Clair River. With a moderate temperature range of 0 to 24 degrees Celsius throughout the year, the lake is home to a variety of freshwater plants and animals and is characterized by multiple shoreline ecosystems, including wetlands, forests and beaches, as well as urban and residential areas. At the northeastern end of the lake is Walpole Island, the largest delta of the Great Lakes and one of the largest freshwater deltas in the world. The delta is home to the Bkejwanong, or Walpole Island, First Nation.

More than 110 species of warm and cool water fish inhabit Lake St. Clair, many of which use the region for feeding and spawning. Popular angling fish include yellow perch, walleye, smallmouth bass and muskellunge. Wetland areas support abundant macrophytes (aquatic vegetation) and both resident and migrating waterfowl. Species of dabbling ducks, swans and plovers are common in the delta region and shoreline marshes.

Aquatic vegetation is most common along the shores, and provides important habitats for fish and invertebrates, as well as food sources for waterfowl. As with other lakes, plant growth is less common in open water areas due to waves and less light penetrating the deeper waters. 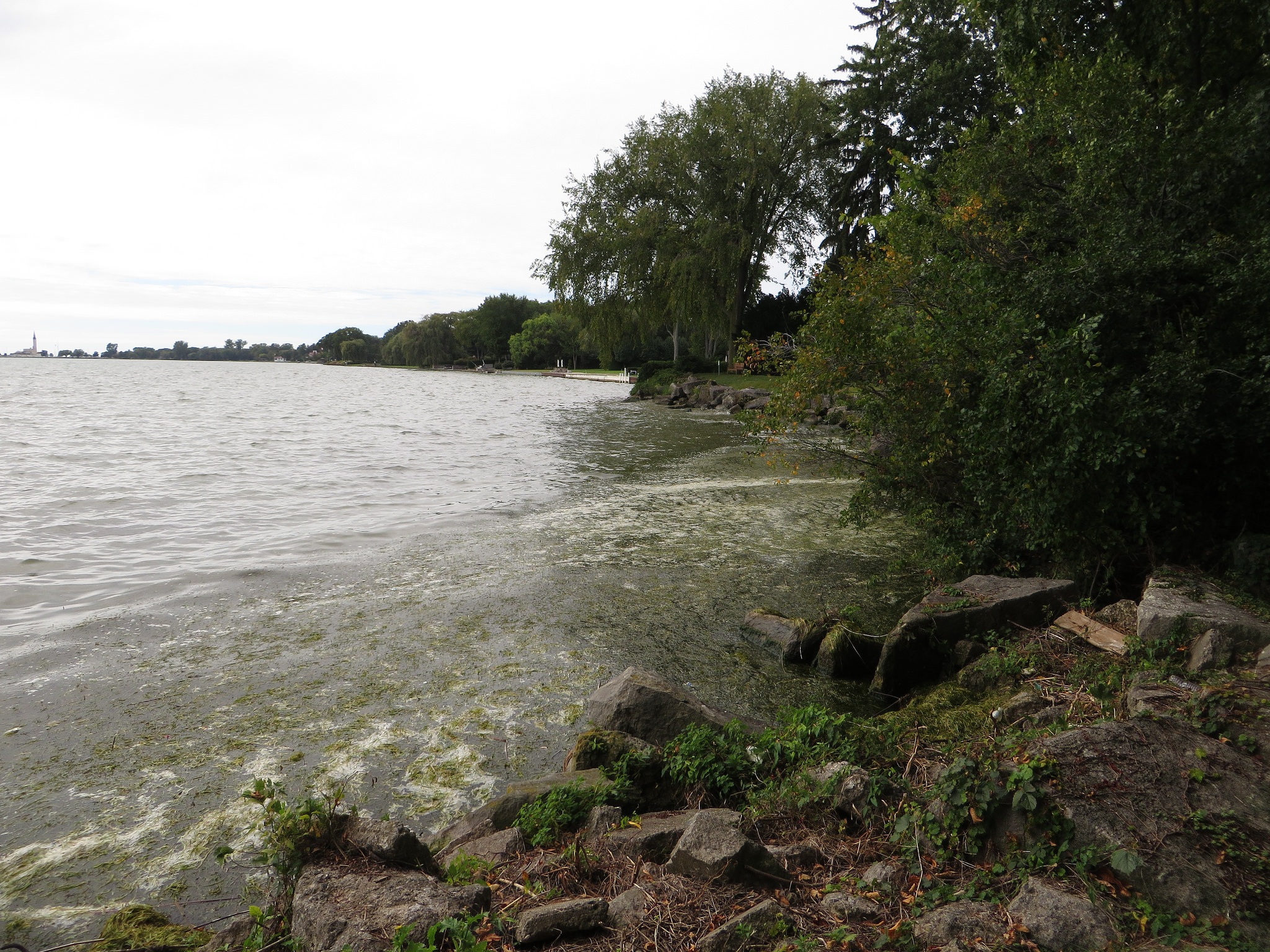 As part of the St. Lawrence Seaway, Lake St. Clair is part of a major transportation route for commercial shipping vessels. An 8.3 m deep dredged navigation channel — more than twice as deep as the natural lake bottom — is maintained to allow for ship traffic. In addition to ship traffic, the region’s many industries and large population mean that pollutants have markedly influenced the quality of the lake's water and sediments. Its once-prosperous Canadian commercial fisheries were closed in 1970 because of high mercury levels in fish, primarily a result of petrochemical plants along the St. Clair River and general industry along the Clinton River. The fisheries reopened in the 1980s, but on a much smaller scale.

In addition to mercury, given the high number of people who live in the region, nitrogen, phosphorus and pesticides sometimes flow into the lake from farmers’ fields and municipal sewers.

Some native fishes have been eliminated or nearly eliminated from Lake St. Clair due to historical overfishing and environmental issues, including lake trout, lake whitefish and lake herring. Lake sturgeon have suffered in the past, though monitoring programs and the construction of artificial spawning reefs are being undertaken to revive populations.

Nonindigenous or invasive species have had a detrimental effect on Lake St. Clair. Zebra mussels, sea lamprey and round goby are some of the current invaders, having entered the Great Lakes system primarily through ship ballast water. Ballast water is carried in tanks at the bottom of a vessel in order to provide stability. When the tanks are emptied, organisms that have travelled with the ship are released into a new environment. Invasive species in Lake St. Clair have disrupted the food webs and habitats of native species. Zebra mussels in particular have indirectly promoted the growth of excess aquatic vegetation by filtering the water, increasing light penetration. Species of invasive Asian carp are currently under surveillance as a potential threat to Lake St. Clair and its tributaries. The species were brought to North America in the 1960s and 1970s and eventually established themselves in the Mississippi River. In 2005, the Government of Canada began budgeting resources for Asian carp monitoring through the Aquatic Invasive Species Program.

The Great Lakes Water Quality Agreement, a commitment between Canada and the United States, outlines multiple initiatives for monitoring and improving the waters in and surrounding Lake St. Clair.

Lake St. Clair is located in the traditional territory of the Haudenosaunee, Ojibwa, Miami and Potawatomi First Nations. Today, Walpole Island, the delta located in the northeast corner of the lake, is home to Bkejwanong First Nation.

In the 1600s, French explorers, traders and missionaries were the first Europeans to explore Lake St. Clair, with the name “Lac des eaux de mer” (Seawater Lake) being designated on a 1656 map by the French cartographer Nicolas Sanson. In 1670, missionaries François Dollier de Casson and René de Bréhant de Galinée were the first to record a detailed exploration across the lake. In 1679, the French explorer ​René-Robert Cavelier, Sieur de La Salle, travelled the lake on the feast day of Sainte-Claire d'Assise, and some historians claim he christened the lake (and river) in her honour. The name Lake St. Clair has endured to today.

Lake St. Clair served as a strategic location during skirmishes throughout the 1700s and 1800s, including the ​​War of 1812​ between the Americans and British.