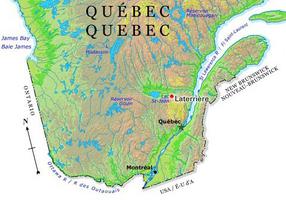 The name was first applied to the township (1850) and then the parish (1882). They were named after Marc-Pascal de Sales Laterrière, who represented Saguenay in the Legislative Assembly of the Province of Canada. In 1921 the village separated from the parish only to be reunited in 1983 to form a municipality. The new municipality then received formal incorporation as a town 6 years later.

In 1846, Father Jean-Baptista Honorat of the Oblate religious community founded a mission at the site of the Grand-Brûlé, a wide expanse of land that was cleared by fire in 1841. This colonization was the first attempt at developing an area without the interference of the financially powerful companies of the time. By 1847, a sawmill was constructed, soon followed by a flour mill (1849) and a rough hewn road to Bagotville.

Father Honorat was forced to leave the settlement in 1849 due to property disputes with Mars Simard, the first settler of the area. The harvesting of the forest brought prosperity and immigration during the 1850s and 1860s.

Agriculture and the forest are still the basis of the local economy. A new resource, aluminum, and its related products are now also being developed. The surrounding area offers vast natural spaces where water sports, hunting and fishing are available. Laurentides Provincial Park is located to the southwest. The mill constructed by Father Honorat, "le moulin du Père Honorat," is a historic site and was fully restored in 1969. The Rivière du Moulin was one of the many rivers in the Saguenay-Lac-Saint-Jean which overflowed it banks during the disastrous flooding of July 1986.