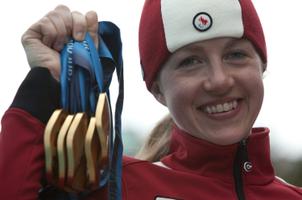 Lauren Woolstencroft was born in 1981 to Mark and Dorothy Woolstencroft of Calgary, Alberta. Although she was born without legs below the knee, and without a left arm below the elbow, this did not stop her from participating in sports and activities, even at a very young age. She started skiing at age four, part of a family ski holiday in Whitefish, Montana — what would become a regular tradition.

“My dad was into skiing and he had the whole family out,” she remarked in a 2012 interview in Prospect Magazine. “We spent a lot of our holidays skiing.”

In 1988, the family attended several events at the Olympic Winter Games in Calgary, their hometown. This included the women’s super giant slalom, in which Canadian Karen Percy Lowe won the bronze medal.

Despite her family’s love of skiing, Lauren Woolstencroft did not consider competing in the sport at first. Instead, she was involved in competitive horseback riding until the age of 14. At that point, a friend of hers, who was on the Alberta para-alpine team, suggested she try alpine racing. “I did, and instantly liked it,” she remarked to Jeremy Freeborn in Prospect Magazine. “I am a competitive person by nature.”

According to her family, Lauren Woolstencroft had always been determined. Her mother, Dorothy, liked to tell the story of how her daughter would descend to the basement every day after school, determined to teach herself how to skip rope. No one was allowed to watch her until she had mastered the technique. Her parents, who had long been involved in the War Amps’ CHAMP program, helped to foster this attitude by simply backing off and letting her do things by herself.

According to Woolstencroft, she learned determination from her parents. “My parents were a big influence,” she told Prospect Magazine in 2012. “They really had the attitudes that basically anything they wanted to do they were going to do. I followed along that path.”

Lauren Woolstencroft’s determination and competitive spirit were key to her success on the slopes. In 1999, she moved to British Columbia to begin engineering studies at the University of Victoria. In addition to the demanding academic program, she also worked part-time while continuing to train and race.

Both in class and on the slopes, Woolstencroft excelled. In 2000, she won the downhill, giant slalom and slalom titles at the world championships. The following year, she won World Cup titles in Super-G and downhill, and finished second overall in the World Cup standings. By 2002, Woolstencroft was a dominant athlete in the sport, and was focused on her first Paralympic Winter Games.

On her first day at the 2002 Paralympic Games at Salt Lake, Woolstencroft crashed on a downhill run, twisting her knee. She was carried off on a stretcher and rushed to the clinic for evaluation; many people assumed she would not be able to continue skiing during the rest of the Games. However, Woolstencroft fought back from her injury and won gold in the Super-G and slalom, as well as bronze in the giant slalom. In recognition of her “undying determination” and “incredible spirit,” she was given the Whang Youn Dai Achievement Award, an honour bestowed on the athlete who exemplifies the spirit of the Paralympic Games.

Woolstencroft continued to dominate on the slopes, and at the 2006 Paralympic Winter Games in Turin, Italy, took home two medals: gold in the giant slalom (standing); and silver in the Super-G (standing). By this time, she was also a qualified engineer, having graduated with distinction in 2005 from the University of Victoria with a bachelor’s degree in electrical engineering. Although she almost retired from competition following the 2006 Games, she decided to continue in the sport and aim for the 2010 Paralympic Winter Games in Vancouver and Whistler, British Columbia.

Woolstencroft was a major asset to the 2010 Games in Vancouver, and not only for her medal haul. As an electrical engineer with BC Hydro, she helped design the distribution infrastructure (such as transformers and overhead power lines) that brought electricity to the mountain events at Whistler.

Woolstencroft retired from competition shortly after the Paralympic Winter Games of 2010. Not long after her retirement, Brianne Law (Canadian Para-Alpine Athletic director) referred to Woolstencroft as “one of the greatest ambassadors the Paralympic movement has ever had.” Winner of 10 Paralympic medals, eight world championships and over 50 World Cup medals, Woolstencroft was a dominant figure in para-alpine skiing, and an inspiration to athletes and fans in Canada and around the world.

“It was always about skiing to the best of my ability,” Woolstencroft remarked in a 2012 interview with Prospect Magazine. “I never spent a lot of time thinking if I had two hands I could ski better, or things like that. Obviously in able-bodied [skiing] and Paralympic [skiing], we’re doing the same thing and that is to get down to the bottom as fast as possible.”

Although no longer an active alpine racer, she continued to promote para-sport and elite competition. “Obviously we’re not on the front pages, or even on the back pages, in the off years,” she told Prospect Magazine in 2012. “I really want… people to keep supporting athletes at the Olympic level and obviously the Paralympic level as well.”

In 2014, Woolstencroft was an analyst with the CBC team that covered the Paralympic Winter Games at Sochi, Russia. The same year, she joined the board of directors for viaSport British Columbia, an organization that aims to increase levels of physical activity in the province.