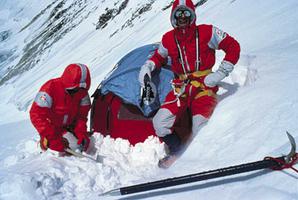 Laurie Grant Skreslet, mountaineer and guide, outdoor equipment designer (b at Calgary 25 Oct 1949). Skreslet's affinity for international MOUNTAINEERING can be traced to early hiking and camping trips in the Rockies and a 2-year, 35-country stint at sea, which followed his departure from home at age 16. He was introduced to climbing in 1970 and within 2 years was a member of a successful expedition to Huascaràn (6768 m), Peru's highest mountain. He participated in expeditions nearly every year thereafter in S America, the US and the British Isles. He first climbed in Nepal in 1981 and returned with the Canadian MOUNT EVEREST EXPEDITION in 1982, where, on Oct 5, he became the first Canadian to stand atop the world. He has since been part of an attempt on Kanchenjunga (8598 m, the world's third largest peak) and the 1986 Canadian Everest Light Expedition, in which Sharon WOOD was successful in her bid to become the first woman from the Americas to reach the 8848 m summit.