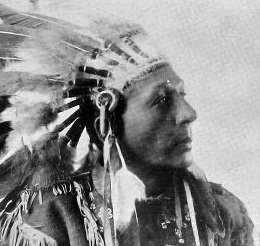 Image of Deskaheh from The Graphic (a newspaper), 1922.

Deskaheh (also known as Levi General) was a Cayuga chief and speaker of the Six Nations Hereditary Council. A member of the Longhouse religion, Deskaheh insisted that the Six Nations retain their languages and distinctive culture. (See also ​Religion and Spirituality of Indigenous Peoples in Canada and ​Indigenous Languages in Canada.)

When the Canadian government tried in 1923 to unseat the Six Nations Hereditary Council and to institute an elected one, Deskaheh acted immediately. He worked to obtain international recognition of the Six Nations as a sovereign Indian nation ruled by a hereditary council of chiefs. Travelling on a passport issued by the council, he went to the League of Nations in Geneva, Switzerland. But the League's secretariat refused to allow him to address the assembly, arguing that Canada had jurisdiction over the Six Nations. Exhausted, Deskaheh became ill shortly after returning to North America and died from pneumonia.

Six months before his death, the Canadian government ended the Confederacy's administrative functions on the ​reserve and organized a vote for an elected council. Both councils existed well into the 1980s, but only the elected body is recognized by the state.