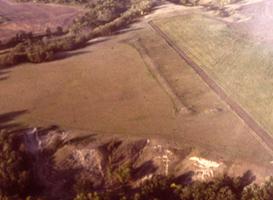 Aerial shot (1970) of a linear mound located in the uncultivated area of Linear Mound National Historic Site. Also showing (lower right) is part of a second mound that is at a right angle with the other and extends into the cultivated field (courtesy E. Leigh Syms). 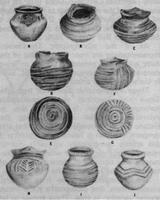 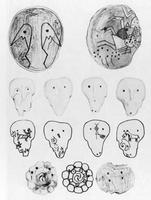 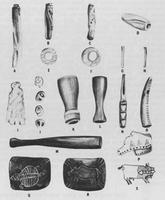 Linear Mounds Site, including the Linear Mounds National Historic Site of Canada, is located on the plain overlooking the Souris River in southwestern Manitoba. The site consists of two long, linear earthen mounds with rounded mounds on each end and another small round earthen mound nearby. The site has been identified as the best surviving example of the Devils Lake-Sourisford Burial Complex with linear mounds. It occurs among the densest concentration of ancient Precontact (pre-fur trade) burial mounds in Canada.

The linear mounds consist of two distinctive earthen ridges with circular tumuli (rounded earthen grave mounds) at each end that enclose sub-surface burial chambers. These earth works were raised as earthen mausoleums honouring the dead. They measured 198 m and 152 m in length, respectively, and both were 6 m wide and 0.45 m high. The round mounds at each end were 0.9-1.5 m high and 10.5-15 m across. These features were created by cutting nearby sod and carrying many containers of soil, which entailed a great deal of work.

The Devils Lake-Sourisford Burial Complex is represented by numerous sites along the eastern and northern edges of the Northeastern Plains and adjacent Parklands. Although most sites are concentrated along the Souris River, they also occur in other areas of Manitoba, particularly along the Pembina Valley of south central Manitoba, and in the eastern Dakotas. They are usually placed in prominent locations such as on the open plains overlooking river valleys or on promontories such as glacially created drumlins. Drumlins are long oval hills made up of till (sediment deposited directly from glacier ice) and pointing in the direction of the glacier movement. The linear mounds tend to be most spectacular in appearance but the round mounds are much more numerous. Some mounds were built as single events but others were built accumulatively over time.

As an example of the Devils Lake-Sourisford Burial Complex culture, the Linear Mounds Site consists of structures left by a group of First Nations who were involved in continent-wide trade networks. They left behind beads made of dentalia (tubular conical mollusk shells) from the West Coast, incised tablets and tubular smoking pipes of catlinite (red pipestone) from southern Minnesota, Knife River flint tools from western North Dakota, and copper items quarried and made around the western Great Lakes. There were also decorated shell mask gorgets, pendants and beads made from marine conch or whelk shell, which originated from what is now known as the Gulf Coast area of the southeastern United States.

The mask gorgets are large face-shaped gorgets (spiritually important items located on the throat or chest area, tied around the neck) made from the outer whorl of the giant marine whelks (snails). They have facial features such as drilled eye holes, a nose ridge, and a mouth portrayal. They sometimes have an incised "forked" pattern around the eyes, symbolizing the black patterns around the eyes of the peregrine falcon. Such patterns have been identified by First Nations elders from the American Southeast as portrayals of Thunderbirds, sacred deities who are messengers taking prayers to the Creator and who bring rain. Other spiritual icons include turtles and salamanders found on cup-sized ceremonial bowls and turtles and bison incised on the stone tablets. Since these people were bison hunters, they sometimes left parts in respect for the bison and the bison spirits.

The age of the Linear Mounds Site has not been established, but based on a few dates from other Devils Lake-Sourisford sites, it is believed to be dated within the AD 800-1400 period. Some researchers have recently proposed that this burial complex is part of the Northeastern Plains Village Complex along the middle Red, James and Sheyenne rivers of North Dakota, dating circa AD 1200-1600, because some of the ornately decorated vessels are similar to sherds recovered from these village sites. However, other Plains archaeologists have rejected this association because they believe that these mortuary vessels are sufficiently distinctive that they should be assigned to a separate ceramic ware.