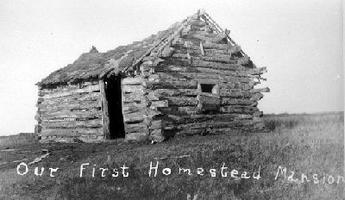 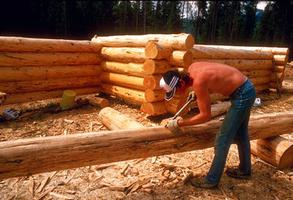 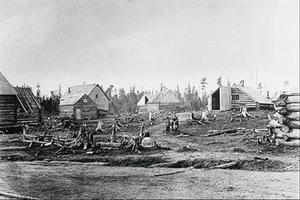 Log Houses are associated with pioneer settlement, past and present, and Canada's forests provided ready building material. West Coast Indians used log frames for their large plank houses long before the arrival of European settlers. Most of the first farmhouses in New France were constructed of posts driven vertically into the ground, a technique used in northwestern France and by some local Indians.

Later, the posts were placed on a sill or foundation above ground level. This method was displaced by the pièce-sur-pièce technique: roughly squared, relatively short logs were laid horizontally, to meet at rabbeted corners. Tapered ends of the logs fitted into slotted vertical posts at house corners and along the walls. Fur traders carried this technique into the Red River valley and the Hudson's Bay Co adopted it as its standard building form (called "Red River frame" or "Hudson's Bay Co frame") for its posts across the continent.

A wide variety of size and complexity in log houses characterized southern Ontario settlements. Loyalist settlers introduced "Pennsylvanian" or "American" log houses, with horizontal logs interlocked at the house corners by a variety of techniques, a style originating with 17th-century Swedish-Finnish colonists on the Delaware River, refined by later German settlers and adopted by far-ranging Scots-Irish pioneers. Although most log houses were later replaced by houses constructed of other materials, many are still occupied as residences.

Later immigrants to the prairie west often patterned their first log houses after customary forms of their homelands (eg, Ukraine). In the subarctic forests, log houses still provide comfortable shelter for trappers and woodsmen. Their attractive appearance and thermal efficiency make them popular not only with summer cottagers across Canada, but among many people with a renewed interest in traditional housing.