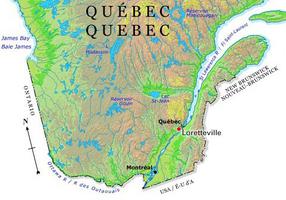 From 1760 to 1904, Indigenous and non-Indigenous people alike were members of the same church congregation, Saint-Ambroise-de-la-Nouvelle-Lorette. In 1904, the Huron-Wendat got their own chapel and church register and a parish municipality and village were simultaneously set up to serve the non-Indigenous population. One municipality became the town of Neufchâtel (now part of Québec City) and the latter became Saint-Ambroise. In 1913 Saint-Ambroise was renamed Loretteville. Loretteville attained its present boundaries in 1965 with the annexation of the town of Château-d'Eau.

Loretteville benefits economically from the tourist dollars spent in and around Wendake by primarily European tourists. These tourists are attracted by the prospects of reliving a mythical Indigenous past by visiting Notre-Dame-de-Lorette Chapel and Maison Aroüanne, by eating traditional Indigenous meals, and by buying Indigenous-made arts and crafts.