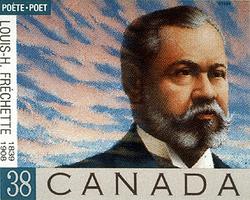 Louis Fréchette was the most important man of letters in 19th-century Québec (courtesy Canada Post Corp).

Louis-Honoré Fréchette, poet, playwright (b near Lévis, Qué 16 Nov 1839; d at Montréal 31 May 1908). Fréchette was the most important man of letters in 19th-century Québec. The son of an illiterate contractor, he studied first under the Brothers of the Christian Schools and then in 3 classical colleges: the Petit Séminaire de Québec, Ste-Anne-de-la-Pocatière, and Nicolet. After graduation he studied law at Laval. He was already writing poems and his first play, Félix Poutré (1862); his first collection of verse, Mes loisirs, appeared in 1863.

After unsuccessful attempts at practising law and founding Liberal newspapers, Fréchette immigrated to Chicago, where he remained for 5 years (1866-71) working for the Illinois Central Railway. While there he launched other newspapers and wrote for the stage, but his manuscripts perished in the Chicago fire of 1871. His only surviving work from this period is a violent verse polemic, La Voix d'un exilé (1866-69), denouncing the Canadian Confederation of 1867 and its Conservative sponsors.

Returning to Canada, Fréchette threw himself into politics, sitting as federal member for Lévis from 1874 to 1878. After marrying into a wealthy family in 1876, Fréchette devoted himself increasingly to literature, and his second verse collection, Pêle-mêle (1877), was well received. By distributing complimentary copies in France, Fréchette paved the way for his recognition by the French Academy, which awarded him a Prix Montyon in 1880. Henceforth, Fréchette was the unofficial poet laureate of French Canada, composing odes for public occasions, issuing collections of his poetry and adapting the works of others for the stage.

His best-known volume of verse is La Légende d'un peuple (1887), a series of historical tableaux tracing the history of Québec from Jacques Cartier to Louis Riel. Subsequently, Fréchette wrote chiefly in prose: polemical letters on Québec education (1893); replies to the attacks of his rival William Chapman (1894); and Christmas stories in English (1899) and French (1900). Decorated in France and England, honorary doctor of 4 Canadian universities and president of the Royal Society of Canada (1900-01), Fréchette was the most widely honoured literary figure of his time in Canada.