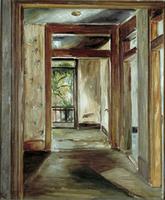 Louis Muhlstock, painter (b at Narajow, Poland 23 Apr 1904, d at Montréal 26 Aug 2001), best known as a painter of the Depression. Muhlstock came to Montréal in 1911 and worked for his family's fruit-importing firm. He took art lessons at night and from 1928 to 1931 studied in France. After 1931 he taught drawing at his Montréal studio and also drew unemployed men in nearby Fletcher's Field, capturing the spirit of the times in sensitive drawings in chalk or charcoal often done on wrapping paper. He evoked his east-end neighbourhood in vibrant street scenes from the market on St Lawrence-Main or shadowed yards. During WWII he sketched riveters at the Montréal shipyards, shown as War Workers, 1945. Muhlstock received recognition in 1937 from Douglas Duncan of the Picture Loan Society, Toronto. During the 1950s and 1960s he held one-man shows at the Montreal Museum of Fine Arts and Waddington Galleries; in 1972 at the Verdun Cultural Centre. In 1976 the Windsor Art Gallery exhibited "45 Years of Muhlstock"; in 1978 he showed at Place des Arts, and in 1986 Concordia University showed "New Theme and Variations." By this time Muhlstock's work was almost entirely abstract. In September of 1996, an 80-piece retrospective exhibited Muhlstock's work at galleries in Québec, as well as in Edmonton. Muhlstock, who continued to paint daily at his home in Montréal until his death, called his work "a moment in time only."