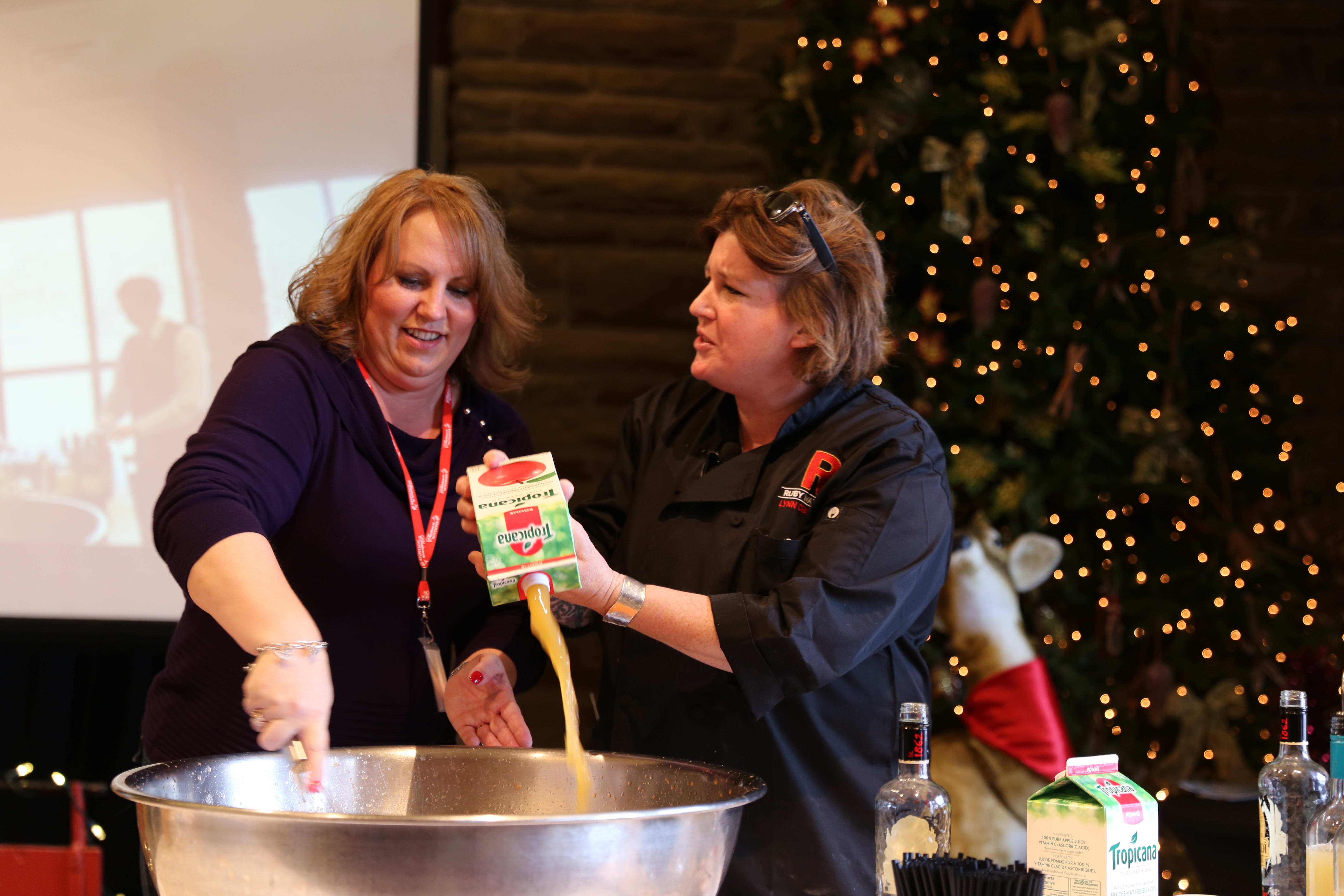 Lynn Crawford, chef, television host, restaurateur and cookbook author (born 1964 in Scarborough, ON). One of the first celebrity chefs in Canada and a well-known star of Canadian culinary television programs, Lynn Crawford worked for 24 years in the Four Seasons Hotel group and now owns her own restaurant in Toronto.

Lynn Crawford grew up in Willowdale, a suburb of Toronto, as one of the two children of Scottish immigrant parents. Before she started high school, her family moved just north of the city to Richmond Hill, where she attended Richmond Hill High School.

After high school, she enrolled as a fine arts major at the University of Guelph in southwestern Ontario. She soon dropped out of university and moved back to Toronto, deciding to focus on a culinary education.

After graduating from George Brown College’s Culinary Arts program, Crawford went to California to work for a month as a kitchen apprentice for Alice Waters. Waters’ restaurant, Chez Panisse, is widely considered the North American birthplace of farm-to-table cuisine.

Crawford rounded out her California experience with a stint at Barbara Tropp’s China Moon Café in Berkeley, also famous for its influence on North American chefs in the 1980s and 1990s.

Back in Toronto, Crawford apprenticed at Winston’s, an establishment hangout on Adelaide Street West during the early 1980s.

Before she became a television personality and opened her own restaurant, Crawford spent most of her career in the kitchens of the Four Seasons chain of luxury hotels.

Her first posting with the hotel group was in Montréal in 1986, and others have included stops in Nevis, Vancouver, New York and Toronto.

During her four-year tenure in this position, she played an important role in developing future culinary talent in Canada. Both Jonathan Gushue (now at the Berlin in Kitchener-Waterloo) and Lora Kirk (the head chef at Crawford’s own restaurant) served under Crawford as the chef at Truffles, Four Seasons Toronto’s former five-star, fine-dining restaurant.

In November 2006, Crawford was transferred back to Four Seasons New York to be executive chef there. Even though the hotel chain had 74 properties in 31 countries, she was the only female executive chef at the company.

Crawford’s celebrity increased considerably when she appeared on an episode of the Food Network’s Iron Chef America on 25 February 2007. Crawford was the first Canadian woman invited to be on the show and the third Canadian overall after Susur Lee and Rob Feenie. The well-known chefs who are guests on the program have an hour to prepare a multicourse menu for a panel of judges who compare it against the one prepared by one of the show’s resident celebrity chefs. For her appearance, peanuts were the surprise ingredient, and chef Bobby Flay was Crawford’s adversary. Flay won by a score of 51–48.

Crawford returned to competitive reality television as one of 13 chefs who participated in the fifth season of Top Chef Masters. The well-known chefs each selected a charity to receive their prize money. Crawford chose the Odette Cancer Centre at Toronto’s Sunnybrook Hospital.

More recently, she has experienced the opposite perspective as a regular judge on the panel for Chopped Canada.

Starting with the first season in 2005, Lynn Crawford was a frequent guest on Restaurant Makeover. This HGTV Canada show was based on the premise of assigning a well-known chef and design team to help reverse the decline of a failing restaurant.

Throughout the show’s five-season run, Crawford was relatively kind to the chefs and cooks of the host restaurants — by comparison, some of the other celebrity chefs could be quite harsh.

In 2009, Crawford’s own show, Pitchin’ In, premiered on Food Network Canada. The show had the celebrity chef visit farmers, fishermen or other food producers in different parts of North America. Each episode followed a formula where Crawford experienced what went into producing a particular ingredient and then cooked with it.

Pitchin’ In was nominated for or won several awards, including two Gemini nominations for Crawford as host in a variety, lifestyle, reality/competition, performing arts or talk program or series.

When Truffles closed in September 2009, the outlook was grim for Toronto restaurants that served the older style of fine dining that features multi-course tasting menus and luxurious ingredients. Around the same time, Crawford was planning to leave her career managing a large team for the Four Seasons and return to cooking more actively herself.

In August 2009, she joined with partners Cherie Stinson and Stinson’s husband, Joey Skeir, to buy The Citizen, a restaurant on Queen Street East in Toronto’s Riverside neighbourhood. Crawford and Stinson, a designer with the firm Yabu Pushelberg, had often appeared together on Restaurant Makeover. They named the restaurant Ruby Watchco after finding a 13-foot-long vintage sign with the moniker and hired Lora Kirk to collaborate with Crawford in the kitchen.

Ruby Watchco received critical attention as the only restaurant in Toronto with a fixed menu where diners at all 72 seats were served the same menu. The four courses — usually a salad or soup, a meat-based main dish, cheese and dessert — were all built to feature local and seasonal ingredients, prepared simply.

In summer 2011 the partners added a kitchenware and gourmet shop called Ruby Eats to their Queen East operation. It sold high-end cookware, prepared sauces and fresh produce until it closed in March 2014.

Crawford’s first cookbook, Lynn Crawford’s Pitchin’ In: 100 Great Recipes from Simple Ingredients, was published by Viking in January 2012. All of the recipes in the book are based on ones that appeared on her show of the same name. Her second book, At Home with Lynn Crawford: 200 of My Favourite Easy Recipes, was released by Penguin Canada in September 2013.

Both Pitchin’ In and At Home with Lynn Crawford were finalists for the Taste Canada cookbook awards.