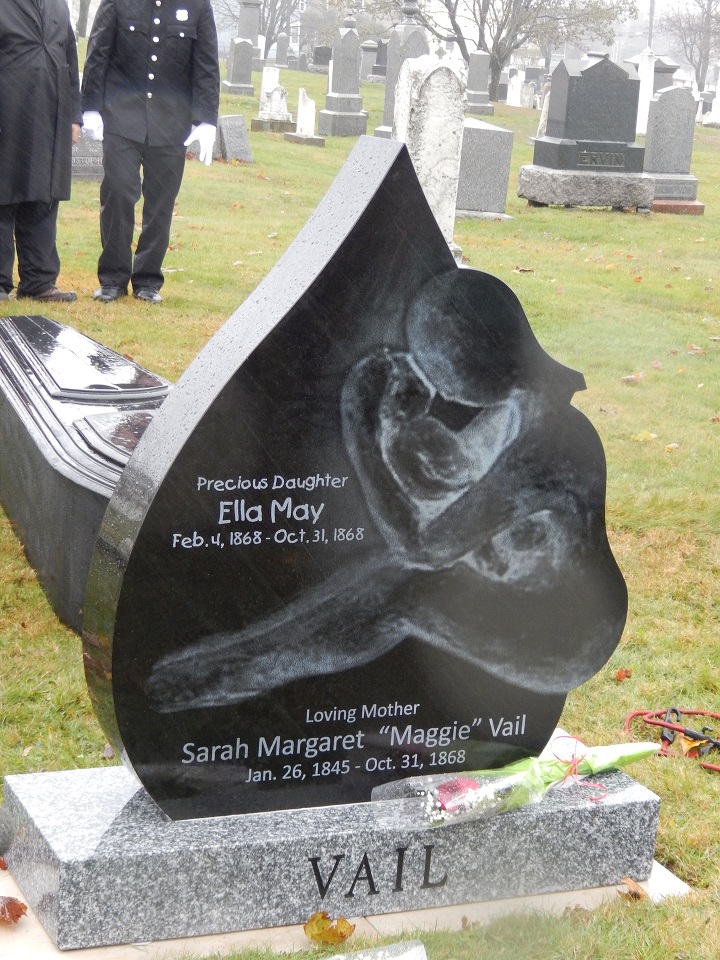 Memorial for Sarah Margaret “Maggie” Vail and her daughter, Ella May, at the Old Cedar Hill Cemetery in Saint John, New Brunswick.

Born in 1839 to a well-respected family in Saint John, New Brunswick, John A. Munroe was a successful architect who lived in an upper-class neighbourhood with his wife and two children. In the summer of 1865, Munroe met 21-year-old Sarah Margaret “Maggie” Vail, a single woman who resided in nearby Lancaster with her ailing father. Vail became infatuated with Munroe and entered a relationship with him despite warnings from her family that he was married.

In the summer of 1867, the news that Vail was pregnant brought about a sudden deterioration in her relationship with Munroe. He visited Vail less frequently but, on one occasion, casually asked her if she would poison his wife. On 4 February 1868, Vail gave birth to a baby girl, whom she officially registered as Ella May Munroe. The child was born with an umbilical hernia and had to wear a truss that Vail’s sister, Phileanor Jane “Philly” Crear, made for her.

Crear demanded that Munroe provide financial support for Vail and the baby. He occasionally sent small amounts of money, with letters telling her not to bother him anymore. Months passed, during which Vail heard nothing from him. Then Vail’s father died, leaving her the family home. Vail went to Munroe for advice on what to do with her inheritance. On Munroe’s alleged counsel, she sold the house and property for $500. According to her brother-in-law, James Olive, who witnessed the real estate transaction, “She took the money and put it in her bosom. She got a needle and thread and sewed it up.”

An unusual series of events began, with Vail, using the alias Mrs. Clarke, following Munroe on a business trip to Boston. Back in Saint John, Munroe paid for Vail’s accommodation in cheap boarding houses. When a proprietor asked Vail, who still called herself Mrs. Clarke, about her financial situation, she replied that her husband had her money. On 26 October 1868, Munroe hired a cab and picked up Vail and the baby for a drive out of town, along Black River Road, to Loch Lomond. He said they were going to visit a family named Collins. Munroe ordered the driver, Robert Worden, to stop at a location well short of the Collins house and said that they would walk the rest of the way. He told Worden to wait for them at nearby Bunker’s Tavern. When Munroe arrived at the tavern with Vail and her child, he said that the Collins family was not at home and Mrs. Clarke would visit them another time. Worden drove them back to Saint John. At about that time, Munroe bought a revolver.

On 31 October, Munroe again hired Worden to drive him, Vail and the baby to Loch Lomond. He ordered the cab to stop at the same location as before, again saying that they would walk the rest of the way and that Worden should wait at Bunker’s Tavern. Less than an hour later, Munroe arrived at the tavern alone and anxious to return to Saint John. He told Worden that Mrs. Clarke was going to Boston and that Mr. Collins would take her to the ship. In Saint John, Munroe arranged for a trunk full of Vail’s belongings to be put aboard a ship bound for Boston.

Months passed, during which Crear heard nothing of her sister, except a story that she had gone to the United States with Munroe. Then, in June 1869, Crear received a letter from Boston that was supposedly written by Maggie, who was illiterate. It said that she had married a painter named Crandall and was doing well. The badly spelled letter was signed “Mrs. Maggie Crandall.”

On 7 September 1869, a group of Black Canadians picking blueberries along Black River Road, near Loch Lomond, came upon the skeletal remains of an adult and a child that had been concealed under brush. They were reluctant to report the discovery, so several days passed before word of it reached the local police and the coroner, Dr. Sylvester Earle. Investigators recovered an adult skull with a bullet hole in it, a child’s skull, several other bones and some hair and scraps of clothing. Flesh and other tissues had decomposed or been scavenged by animals. Hair and remnants of clothing indicated that the adult was female.

The coroner’s inquest convened on 16 September 1869 and lasted almost three weeks, with 52 witnesses testifying. Suspicion of murder initially fell on a grocer named James Cain (also reported in newspapers as James Kane), who had allegedly fathered a child in a previous marriage to an American woman. Neither the woman nor the child could be found, and the police and public speculated that the remains could be theirs. Cain was subsequently arrested as a suspect.

However, evidence presented at the inquest strongly pointed to Maggie Vail and her baby, Ella May, as the victims. Witnesses identified a hat and pieces of clothing found with the remains as Vail’s and recognized the child’s truss. Other witnesses had seen Vail and Munroe together on numerous occasions, and Worden told of the two trips to Loch Lomond. One of Vail’s former landladies said that the baby girl closely resembled Munroe. A trunk discovered in the unclaimed baggage locker of a steamship company in Boston was found to contain clothing that belonged to Vail and Ella May, as well as a tintype photograph of Munroe. The inquest also raised the matter of $500 from the real estate sale. The money was nowhere to be found, but members of Vail’s family claimed that she had entrusted it to Munroe.

Munroe was subpoenaed while the inquest was still ongoing. He appeared in the office of the coroner, Dr. Earle, with his lawyer, Samuel R. Thomson. Munroe admitted knowing Vail but denied being the father of her child. He also denied advising her to sell her home. He said that he had taken Vail to Loch Lomond to visit friends. To the best of his knowledge, Munroe said, Vail had moved to Boston, where she was to be married. When Dr. Earle suggested that Munroe get in touch with Vail to clear up the matter, Munroe reacted in a suspicious manner and expressed concern that “things looked very black for him.” On 21 September, Munroe was arrested as a murder suspect.

The news of John Munroe’s arrest stunned the community. The local press quickly came to his defence. A Saint John Daily Morning News editorial stated “The first of suspicion having lighted on Mr. Munroe (Architect) created a painful sensation throughout the City and fell like a thunderbolt on his many friends. The idea of his being guilty of such a crime, or of anything approaching to crime, seemed to be utterly repudiated as unworthy of belief.” The press argued that it had not been conclusively proven that the remains were those of Vail and her child. Despite the evidence presented at the inquest, editorials suggested that James Cain was far more likely to be guilty of adultery and murder. The pervasiveness of that attitude was evident in the treatment of the two suspects while the inquest was still in session: Cain was held in the county jail, while Monroe was comfortably lodged in the police chief’s house.

However, additional evidence, including Philly Crear’s identification of Ella May’s hair and her testimony that Munroe had spoken of poisoning his wife, cast even more suspicion on Munroe. By the close of the inquest, Cain had been released on a cash bond and instructions to return to court if required. Munroe would stand trial for murder. The local press, still firmly on Munroe’s side, predicted that, at the trial’s conclusion, “an innocent man will be restored to the full enjoyment of the rewards of his till [sic] and the advantages of citizenship.”

A Question of Character

The sentiments expressed in the press reflected the deeply entrenched belief that individuals of high social standing were, by the very nature of their character, incapable of committing sordid acts. Criminals were perceived as morally and intellectually weak, bred by poverty, which was itself a consequence of laziness and dissolute habits. Gentlemen like John Munroe, who were well educated, financially successful and held in high esteem by their peers, were regarded as pillars of the community. The prevailing assumption was that such persons represented the very best of society and could not sink to brutal depravity.

John Munroe’s trial in Saint John began on 7 December 1869 before Chief Justice John Campbell Allan. William Henry Tuck and Attorney General Andrew Rainsford Wetmore prosecuted for the Crown. Samuel R. Thomson represented Munroe, who, in accordance with the law, could not testify in his own defence. The Crown had been unable to confirm that Ella May had, in fact, been murdered, so Munroe was tried only for the Vail homicide. The prosecution presented the same evidence that had been given at the coroner’s inquest and bolstered its case with additional testimony, such as a witness’s claim that Munroe was the only person who ever visited Maggie Vail at her residence and Philly Crear’s identification of a peculiar incisor tooth in the adult victim’s skull as being identical to the one her sister had.

Thomson argued that the evidence against Munroe was circumstantial and didn’t prove that the victim was Vail. He deplored a justice system that forbade the accused the right to testify. However, his principal strategy was to prove his client’s innocence by showing him to be a man of unimpeachable character — a devoted son, husband and father who couldn’t possibly have committed a heinous crime. Thomson pointed out that a financially secure man like Munroe had no reason to covet Vail’s $500. He conceded that Munroe might have committed adultery but implied that Vail was a temptress who had ensnared him. Thomson also argued that a guilty man would have removed all evidence from the crime scene. He called on 35 character witnesses, including Munroe’s parents. In response to Thomson’s “good character” strategy, Attorney General Wetmore remarked, “Every man has one until he forfeits it.”

On 17 December 1869, after less than an hour of deliberations, the jury returned a verdict of guilty, with a strong recommendation for mercy. On 21 December, Justice John Campbell Allen sentenced John Munroe to be hanged on 15 February 1870. In the opinion of the press, Munroe had been wronged. A petition to have the death sentence commuted to life imprisonment received more than 2,000 signatures. Neither the jury’s recommendation nor the petition was successful. On 25 January 1870, Governor General of Canada John Young signed the order-in-council that approved Munroe’s execution. Munroe went to the gallows on the appointed date.

After the execution, reporters were shown a confession written and signed by John Munroe and witnessed by two clergymen. Munroe stated that he had no intention of harming Maggie Vail on the first trip to Black River Road. They had done some target shooting. He later decided that the location “was a suitable spot to commit a bad act.” On the second trip, he became enraged when Ella May began to cry. “I strangled the child. I do not know if it was actually dead.” Vail fought to protect her daughter, and Munroe shot her in the head. He covered the bodies with branches and left.

Munroe admitted that he had taken about half of Vail’s $500 and written the letter that Philly Crear had received. His confession provided no clear motive for the murders and held no indication of remorse. The closing sentence said, “I never killed any other person or child.” The confession was widely circulated in the press and was a shocking revelation to Munroe’s many sympathizers.