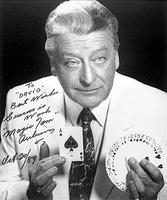 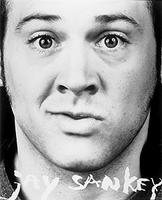 Magician Sankey developed a routine in which a deck of cards penetrates the wall of a round balloon, only to be found sealed inside.
PreviousNext

Magic is a performance or demonstration of events which appear to occur in defiance of natural law. It has been employed for centuries in the practice of witchcraft and religious rituals by so-called prophets, witch doctors and medicine men in support of their claims to possess supernatural powers. Its practice and fascination for mankind can be traced in Egyptian records as far back as 2700 BC. Indigenous peoples of North America were performing magic long before the arrival of Europeans. Archaeologists have uncovered migis (cowrie shells), which were widely used by magic practitioners in the region. It is believed they were used not only for ritual use but also for the practice of sleight-of-hand. Ojibwa played a "moccasin game" which bore a close resemblance to the notorious "shell game" still popular in modern magical entertainment.

The first known white magician to appear in Canada has been reported as one Maginnis, performing in Halifax in 1875. As Canadian magicians toured the country in the late 1800s along with others from abroad, the popularity of magic increased, not only as a performing art but also as a hobby. The art of magic involves an unusually diverse range of mental and physical talents, artistic, creative and histrionic. In Canada, its devotees include about 1700 professional and part-time performers, amateurs and hobbyists. The hitherto jealously guarded secrets of magic are available to the public in bookstores and most public libraries. Manufacturers of magic apparatus and stage illusions publish magazines and catalogues for their customers. Magic societies have their own journals for private circulation among their members. The largest among these is the International Brotherhood of Magicians, which is an affiliate of Magic Clubs in more than 60 countries. The movement was founded in Winnipeg in 1922 by Melvin G. McMullen (stage name Len Vintus). The head office of the IBM is now located in the US.

The performance of magic is generally divided into 5 specialties: close-up, stage, mental, children's and escape. Close-up magic is performed for small groups of people using hand-held props (cards, coins, finger rings, matches and virtually anything the magician can carry on his person). Johnny Carson was known to dabble in close-up magic and, as a result of his fascination with it, invited close-up magicians to perform regularly on The Tonight Show throughout his tenure as host.

Stage magic is performed, as the name would suggest, on a platform or stage for larger groups of people. This specialty can be further subdivided into manipulation acts, in which a great deal of sleight-of-hand is involved; dove acts, in which the act focuses primarily on magic with doves; and illusion acts, in which the magician performs much larger feats of magic, such as sawing a lady in 2, self-levitation and other grand feats. Any stage magic that does not fall into these categories, such as smaller, hand-held, self-working illusions, would be considered a general stage act.

Mental magic refers to material that appears to be carried out by telepathy, mind-reading and fortune-telling. The Amazing Kreskin, best known for his frequent appearances on The Late Show with David Letterman, is perhaps the most recognized mentalist in the world today.

Children's magic involves tricks and routines that, while not necessarily deceptive to adults, are particularly magical to children. For the most part they feature simple plots, colourful props and usually audience interaction. Although magicians are often assumed to perform for children, there are many who perform exclusively for adults - at trade shows, corporate shows, clubs, bars, restaurants, and anywhere else adults are likely to gather without children.

Escape magic refers to performances wherein magicians are able to extricate themselves, with no apparent aid, from one or more restraining bonds. These can include ropes, handcuffs, shackles, chains, straitjackets and trunks. The greatest escape artist of all time was Harry Houdini (b Ehrich Weiss in Hungary, 1874-1926), whose innovative escapes remain largely unsurpassed today. Houdini died after receiving a blow to the stomach in his dressing room at The Princess Theatre in Montréal. Approached by a McGill University boxing star who admired his strong body and asked if he could "throw a punch" at the magician's stomach, Houdini agreed but was caught off guard by the actual punch. A week later, on 31 October 1926, he died of complications resulting from a ruptured appendix.

Often magicians incorporate several specialties into one act. Close-up and stage magicians often do some mental magic. Stage magicians often do some manipulation and dove work, throwing in an illusion or 2 for good measure. Some performers incorporate all the specialties into one show. David Copperfield, for example, performs close-up magic on stage with the help of a camera and a giant-screen television.

Many Canadian magicians are recognized internationally in each of these specialties as inventors, authors, performers and teachers.

Toronto's Ross Bertram (b John Ross Bertram, 1912-92) was widely considered to be one of the world's greatest close-up magicians. His innovative techniques, particularly with coins, were known to fool even well-versed magicians. He is also recognized as a pioneer in the performance of magic at trade shows and his original material has been documented in two books: The Magic and Methods of Ross Bertram and Bertram on Sleight of Hand.

Jay Sankey (b 1965) and Gary Kurtz (b 1954), both from Toronto, have established themselves among the world's foremost innovators in close-up magic and are acclaimed authors. They are recognized for their uniquely visual approach to magic, specializing in material that is particularly striking when witnessed. Sankey, for example, developed a routine wherein a deck of cards is instantly caused to penetrate the wall of a round balloon, only to be found sealed inside. David Copperfield used a version of this trick, with Sankey's permission, on one of his television specials.

Also from Courtright, Ont, close-up magician Stewart James is considered to be one of the most brilliant and prolific magical inventors of our time. Born in the early 1900s, not much is known about the man - in fact, he is often considered as enigmatic as the tricks he invents. Having been raised in a relatively isolated part of Canada, he developed his innovative ideas largely uninfluenced by other magicians - as such, they were known to fool even his peers. He is also the only Canadian ever to have received a creative fellowship from the Academy of Magical Arts in Hollywood. A portion of his massive creative output was published in Stewart James in Print: The First Fifty Years.

Finally, from Stoney Creek, Ont, dove-worker Greg Frewin has been praised in recent years for his innovative, ultra-modern performances and techniques. In 1994 in Yokohama, Japan, he became the only Canadian ever to win a medal in the stage competition at the Fédération Internationale des Sociétés Magiques, considered the Olympics of magic.

Winnipeg may well boast Canada's best-known magician, Douglas James Henning (b 1947). Henning obtained a grant from the CANADA COUNCIL to study with some of the world's greatest magicians, after which he created Spellbound, a full-evening magic show at the ROYAL ALEXANDRA THEATRE in Toronto. This led to The Magic Show, which ran on Broadway for over 4 years. In 1974 his first "TV Spectacular" magic show, seen by 60 million people, created a great surge of interest in magic. Subsequent annual specials resulted in one Emmy award and 7 nominations. In 1982 he assembled his second Broadway production, Merlin, which ran for several months, setting Broadway box-office records for one-week receipts. In the late 1980s and 1990s Henning has put magic aside. He ran for office as a member of Canada's Natural Law Party and continues to raise funds for Veda Land, a theme park concept which he created with the Maharishi Mahesh Yogi.

Montréal's Carl Cloutier (b 1955) accomplished an unprecedented feat by winning 5 of the most prestigious international close-up magic competitions in one year, culminating in the coveted Close-Up Competition at the Fédération Internationale des Sociétés Magiques held in Yokohama, Japan, in 1994. Regarded as one of the world's most innovative magicians, Cloutier continues to conduct seminars for other magicians on his techniques. He is best known for his pure sleight-of-hand, preferring to use very few props and no gimmicked items. One of his signature pieces is to borrow a finger ring from the audience and cause it to vanish in his bare hands. He then points to a kiwi which has been resting on the table since before the trick began, quite out of reach. Upon cutting the kiwi in half, the borrowed ring is found stuck inside.

"Magic Tom" Auburn (1917-1990) is a household name in much of Eastern Canada, particularly in his hometown of Montréal, largely due to his regular appearances on CTV television. In 1961, he began a weekly series for children, Magic Tom's Road Show, which ran for 15 years and became the longest running series in Montréal history. Letters (sometimes as many as 20 000) poured into the station every week praising his work. In 1976 he moved to French-language television and appeared daily on Nouveaux Tennants for another 5 years. He was a pioneer of magic on Canadian television.

Québec City's Gary Ouellet, a prominent Canadian lawyer, is also one of the world's foremost magic innovators. Renowned for his uniquely theatrical approach to magic, he has written several books on his original material, most notably Close-Up Illusions, and has appeared on more than two dozen instructional video tapes. Ouellet served as the North American collaborator for Japan's Tenyo line of magic, and as a consultant for magicians such as Lance Burton, Melinda, and David Copperfield. Ouellet has recently been involved in producing magic specials for television including 3 by David Copperfield for CBS; 2 World's Greatest Magic specials for NBC; and The Champions of Magic for ABC. In 1996 he received an Award of Merit from the Academy of Magical Arts in California for extraordinary contributions to the world of magic, along with Bob Jaffe and Gary Pudney.

While virtually every major city in Canada has at least one magic shop, there are only a handful of internationally recognized publishers and manufacturers. Morrisey Magic in Toronto, Micky Hades International in Calgary, Videonics in St John's, Newfoundland, Perfect Magic in Montréal and The Camirand Academy of Magic in Longueuil, Québec all produce material that is distributed worldwide, including books, videos, tricks and accessories.

Canadian Magicians Resident in the USA

Born outside of Ottawa in 1894, Dai Vernon (b David Frederick Wingfield Verner) was perhaps the most prestigious magician to have emigrated to the USA. He was invited by the Academy of Magical Arts to become the resident "living legend" at the Magic Castle in Hollywood. Considered by many to be the greatest magician who ever lived, his ground-breaking techniques, particularly in close-up magic, were known to fool even other magicians of his time. In fact, he is perhaps best known for inventing a card trick that fooled Houdini. Vernon's published works are now considered classics and his material is still being performed by magicians today. He died in 1992 at the age of 98.

Author and escape artist James Randi, also known as "The Amazing Randi" (b Randall Zwinge, 1928), is infamous for his well-staged publicity stunts, including escaping from a straitjacket while suspended upside down over Niagara Falls, and known for his crusade against those claiming to possess psychic abilities. In this second capacity he wrote The Truth about Uri Geller and Flim Flam: Psychics, ESP, Unicorns and Other Delusions.

Other notable Canadian magicians resident in the USA include the author and performer John Booth, and the stage magician and dove-worker James Dimmere.