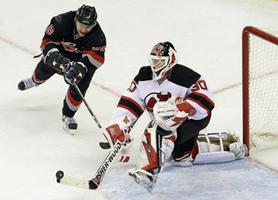 Martin Brodeur, hockey player (b at Montréal, 6 May 1972). Martin Brodeur is one of the NATIONAL HOCKEY LEAGUE 's most successful goaltenders. Typical of many Canadian children, Brodeur's love of hockey began when he played street hockey with his friends. He idolized such legends as Patrick ROY and his own father, Denis Brodeur, a goaltender who won bronze with the Canadian hockey team at the 1956 OLYMPIC GAMES. He began to play organized hockey as a member of the Saint-Leonard Minor Hockey Association. At age 16 he gained a spot in Midget AAA hockey, playing with the Montreal-Bourassa team and distinguishing himself among scouts as a promising future prospect, particularly during the National U17 Hockey Festival in 1988. The following year he joined the Saint-Hyacinthe Laser of the Quebec Major League, with his sights set on an eventual spot on an NHL team.

Brodeur was signed to the New Jersey Devils in 1991. He won his first game out when he was called up to replace the team's injured goaltender. In his first official season as an NHL player, 1993-94, his statistics were outstanding; he won 27 games and registered 3 shutouts. For his efforts Brodeur received the CALDER TROPHY and was named Rookie of the Year. In 1995 the Devils defeated the Detroit Red Wings to win the STANLEY CUP; Brodeur would help the team to additional Stanley Cup victories in 2000 and 2003.

In 1996 Brodeur was invited to participate in his first NHL All-Star Game, and was ultimately invited to the event an additional 9 times. Also in 1996 he joined Team Canada for the World Championships in Austria, helping them to a silver medal win. The following season, 1996-97, he was awarded the William M Jennings Trophy for giving up the fewest goals that season, an honour he would win 3 more times from 1997 to 2009.

Like his father, Brodeur was a formidable member of the Canadian team in Olympic competition. At his first Olympics, 1998 in Nagano, the team went home without a medal. Yet their crowning achievement came in 2002 when they won the gold medal for the first time since the EDMONTON MERCURYS' victory in 1952. Brodeur represented Canada again in 2006 but the team failed to finish in the top 3.

Martin Brodeur is known for his hybrid style and quick reflexes, and his game has a general consistency that rivals some of the best-ever goaltenders in the NHL. In 2009 Brodeur surpassed his idol Patrick Roy's record of 551 wins when he reached 552 on 17 March in a game against the Chicago Blackhawks.