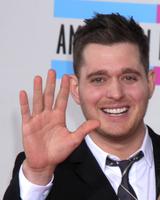 Michael (Steven) Bublé. Pop singer, songwriter, actor, b Burnaby, BC, 9 Sep 1975. Michael Bublé is also a citizen of Italy. He attended Cariboo Hill Secondary School. His initial public singing experiences in the early 1990s revealed the influences of his swing- and crooner-enthusiast Italian-Canadian grandfather and voice lessons with US operatic baritone Joseph Shore (then at the University of British Columbia). Bublé won the BC Youth Talent Search in 1993. In the early years of his career, Bublé performed in an extremely wide variety of semi-professional live contexts, appeared in 1996 in minor and/or uncredited roles on TV's Death Game and The X-Files, recorded an independent album (First Dance, 1996), and appeared in Bravo!'s 1997 TV documentary Big Band Boom! During that period, he also moved to Toronto and appeared in several musicals.

In the summer of 2000, Brian Mulroney's former speech writer Michael McSweeney heard Bublé sing at a corporate party and enthused about him to the former prime minister. The Mulroneys invited Bublé to sing at the wedding of their daughter Caroline that September, where he sang "Mack the Knife" and was introduced to producer David Foster. Around the same time, Bublé wrote a pair of Genie-nominated songs for the Canadian film Here's to Life (2000), and then lived briefly in the US (Los Angeles in particular), appearing as a karaoke singer in the film Duets (2000), and as a nightclub singer in Totally Blonde (2001). He recorded two additional independent albums, Babalu (2001) and Dream (2002).

In 2002, with the encouragement of Paul Anka, Foster signed Bublé to 143 Records (Reprise/Warner) and released Bublé's self-titled major label debut, Michael Bublé (2003). It featured such vocal-pop and pop-rock standards as "Fever," "The Way You Look Tonight," Van Morrison's "Moondance," and the Bee Gees' "How Can You Mend a Broken Heart." The moderately successful album (top 10 in Canada and the UK and top 50 in the US, but No. 1 in Australia) was supported by US TV appearances (such as on NBC's Today Show) and an international tour, and was quickly followed by the Christmas EP Let It Snow (November 2003) and the live CD/DVD set Come Fly with Me (2004). Several of the album's tracks were also used in the film Down with Love (2003). In the same period, Bublé appeared in the film The Snow Walker (2003) and the US TV shows Days of Our Lives (2003) and Las Vegas (2004).

It's Time (2005, including several co-written original songs, such as "Home," which was covered by various artists) reached No. 1 in Canada and several other countries, No. 2 in Australia, and No. 7 in the US. It was Billboard's top jazz album of 2005 and 2006, and remained at No. 1 for more than 80 weeks. Bublé also won four Juno awards in 2006, for pop album of the year, single of the year ("Home"), album of the year, and artist of the year. The video for "Save the Last Dance for Me" won the MuchMoreMusic award at the MuchMusic Video Awards (2006). The live concert CD/DVD Caught in the Act was also released in 2005. Call Me Irresponsible (2007, including the crossover adult contemporary single "Everything") reached No. 1 in the US and sold very well internationally, with "Everything" reaching No. 10 in Canada and the video winning a MuchMoreMusic award (2007).