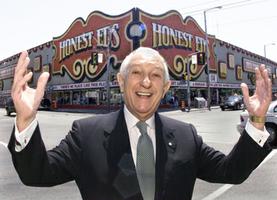 Edwin Mirvish "Ed," theatrical producer, entrepreneur (b at Colonial Beach, Virginia 24 July 1914, d at Toronto 11 July 2007). Born in the US, Ed Mirvish came to Canada in 1923 and became well known for "Honest Ed's" discount department store and the several restaurants he operated in Toronto. Mirvish had long been involved with theatrical production. In 1962 he bought the Royal Alexandra Theatre in Toronto and in 1982 he purchased the famous Old Vic Theatre in London, England, which he refurbished and restored to its former splendour. With his son, David, he presented many noteworthy productions at the Old Vic, including the Stratford, Ont, production of The Mikado and Michael Bogdanov's modern interpretation of Shakespeare's Henry IV, Parts I & II, and Henry V. In 1998 the Mirvishes sold the Old Vic Annex to Britain's Royal National Theatre.