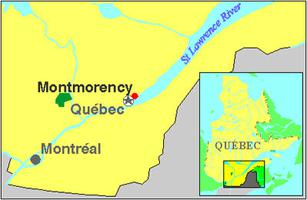 Montmorency, Qué, a village located 12 km east of QUÉBEC CITY, is now part of the city of BEAUPORT. The famous 84 m CHUTE MONTMORENCY were named in 1608 by Samuel de CHAMPLAIN in honour of the duc de Montmorency, later the viceroy of New France. General James WOLFE's troops were defeated on 31 July 1759 on the cliffs of the falls near Courville.

The Montmorency Manoir, built in 1781 by Frederick HALDIMAND, governor general in chief of Canada, was inhabited 1791-94 by the duke of Kent, father of Queen Victoria. First known as the "Kent House," it suffered a devastating fire in 1993 but was rebuilt by the following year.

By the late 19th century, a large textile factory founded in 1889, Montmorency Cotton, located near the falls and served by the CPR, employed most of the local population. It became Dominion Textile in 1905 and operated until 1985. After its fusion with Beauport in 1976, the area has been developing into a residential suburb of Québec City.