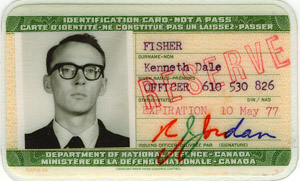 Ken D. Fisher's indentification card issued by the Department of National Defence. The card shows that Mr. Fisher was a member of the Reserve in the 1970s.
(Courtesy of The Memory Project/Ken Fisher)

I suppose a highlight for me was the airborne course. That was a very challenging course, with a great sense of accomplishment once it was completed. A lot of the things that we were issued while I was in the service, which was in the '70s, were World War II era, because that was the best stuff we could get. So my helmet, for example, is a World War II helmet, and the uniform was the old worsted wool uniform of World War II. And as a matter of fact, my first helmet that was issued was a World War I helmet – the British sort of basin helmet.