"So you see, they do a great deal for us, bring out potential qualities that may have been deeply hidden: tenderness, love and understanding"

"So you see, they do a great deal for us, bring out potential qualities that may have been deeply hidden: tenderness, love and understanding" 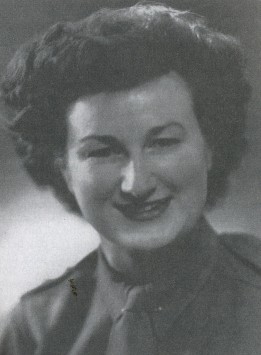 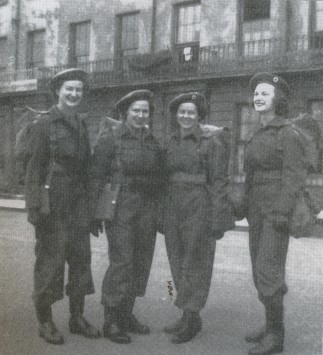 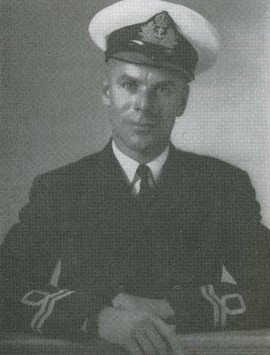 These were all letters to my parents. So this is about the first one that I checked. Now, this is when we were still in France. We were waiting to move up to Belgium. We were not really working when we were in France. We were there for maybe three weeks or so, in big huge tents. And we were living about 40 to a tent. Ever live in a tent with 40 other women? [laughs] I said, we have driven for miles past Bayeux in France, Tilly, Caen, Carpiquet, Charenton, Bologne, Saint-Lô and Cherbourg, we went there. Many other towns along the way. The day we went to Cherbourg was the news the day broke that Paris was liberated. It’s easy to see that Paris is truly the heart of France. And the whole spirit of the people seemed to lift.

They smiled and they waves with renewed vim and vigour. Everywhere they told us the news. The streets were filled with flags and banners. Driving back through the battered towns and villages, it gave us a thrill to see how everyone reacted. We saw some German prisoners here and there, a sorry, dejected looking lot, solemn too. Crowds sang “La Marseillaise” [French national anthem]; and everyone was conscious of the great wave of jubilation sweeping across the country. So that was one letter.

And here’s another one. It was here in Bruges on 27 September 1944, the No. 12 Canadian General Hospital arrived and set up, and quickly realized that we were operating as a casualty clearing station rather than a general hospital. Patients flooded in directly from the battlefields. Our first patients were from the Leopold Canal and then from the Scheldt Estuary. They were both battles. We were a 1,200 bed hospital and were soon filled to overflowing with cots in the hall. We all worked 12 hour shifts, seven days a week.

And this taxing schedule went on for weeks. Everyone just kept going. The matron asked for one of us Red Cross Group to assist in the OR [operating room] doing clerical work. We sent Mary, expecting to get her back in a week or so, but she became so valuable to them that she was there until the end of the war. So, needless to say, Sheila and Laura, and I carried on doing the work of four.

See, life goes on as usual. This is November the thirteenth. And I said, again, we’re still a casualty clearing station with the battle wounded coming straight to our hospital, caked in mud and blood. Convoys continue to come in with the wounded. Admitting keeps us posted as to when a new group is due so we can have one of us there, day or night, to greet them with whatever goodies we could muster. Other groups leave, either headed back to England to hospitals there, or if recovered, back to join the regiment. Some of the men are terribly injured and are in a special ward. It’s sad to see them so severely hurt. They are usually sent off to England as soon as they are strong enough to travel.

And this is the Ardennes, the Battle of the Bulge. This is September of 1944. Adolf Hitler decided to stage an all-out offensive attack through the Ardennes Forest. Three months later, on December the sixteenth, this attack was launched with 20 German divisions, including seven track Panzer [Panzerkampfwagen IV] units against four U.S. divisions. The U.S. units were sorely outnumbered in an unequal encounter, meeting the German Tiger [Panzerkampfwagen VI Ausführung H] tanks without support of their own armoured units. The U.S. troops stood their ground as best they could and they suffered heavy losses. And, anyways, seems like that had been a complete surprise and shock to the Allies with their superior intelligence and air reconnaissance reports. They had completely missed the huge buildup of men and armours poised against them. It defied all military reasoning for Germany to launch this huge operation through the thick forest in midwinter. The allies did not realize that Hitler had forced this ill-conceived plan on his generals, much against their experienced judgment.

There was one funny thing I was telling my daughter a few minutes ago was how we had these showers. This when we were first in Belgium, I guess. In France and Belgium, we were living in huge, big tents. We were able to go to a shower, like a laundry type of thing for the armed forces, the ones that were in the field in tents. And so we were able to go every couple of nights and by truck, we always rode in the back of the truck. And we went to this place and they had two tents together, huge tents, you know. You drove from one to the other; they were right against each other. And one was the dressing area and the other was the showers. And so you would guess that maybe 40 of us would be in there at once. And you’d get 40 women all naked going from one end to the next tent where the showers were and the showers were pipes running across the ceiling and maybe about two feet apart, back and forth. And this is when they were turned on, hopefully at the right temperature. And everybody had their bar of soap, but the thing was built sort of on a sloping floor. It was an uneven field wherever that tent was pitched. So needless to say, if you dropped your soap, you never saw it again. [laughs] And anyway, you know, there were amusing things like that.

All the patients, they’d tell us the most strangest and most hair-raising tales of their lives and loves, some of them true enough, but very often, embellished with extra details. You get a much broader outlook on life and realize that everyone has troubles and greater ones than the small worries you might have at the time. Without the ability to laugh at almost anything and everything, and acquiring a new philosophy on life. That’s Sheila, so that’s one of my best mates in the Red Cross. As Sheila so aptly put it, why worry, it won’t even matter in 10 years. We offer advice to the lovelorn, sympathize and that too when their girlfriend at home runs off, marries a zombie. (Now, zombies are the ones that didn’t want to join up.) Tell them to keep waiting, even if they’re not receiving any mail because we’re absolutely sure the folks at home are writing faithfully. Sometimes we even write letters to them ourselves and toss them in the ward mail, so they get something at least as the mail is being distributed.

So you see, they do a great deal for us, bring out potential qualities that may have been deeply hidden: tenderness, love and understanding, and certainly make you realize that there is a great joy doing for others and it really is more blessed to give than receive.