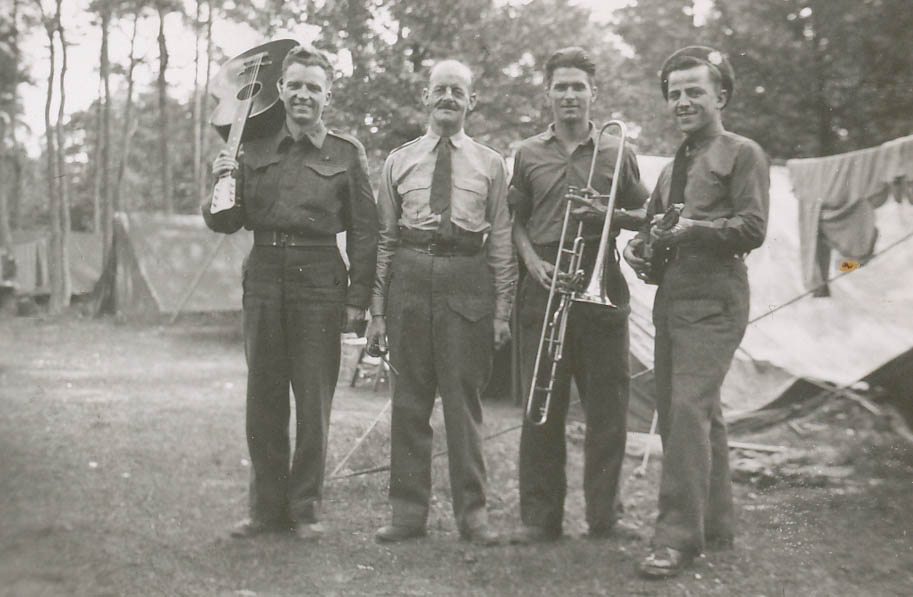 Maurice Hundleby with friends at the campsite in the wood, near Apeldoorn, The Netherlands.
(Courtesy of The Memory Project/Maurice Alan Hundleby)

"So another pal of mine and myself, we used to pack up a bunch of sandwiches and anything else we could grab and give it to the kids waiting outside, because they were starving, absolutely."

I was conscripted initially, and got to the point where I didn’t know anybody in town, everybody’d gone. So I signed up to, on the permanent, which meant I could go overseas, so. And it wasn’t too long, October of 1944 I went over I guess it was, yeah. And went over to Britain with 10 000 other guys on the same ship. And we zig-zagged all across the, because there was 10 000 of us on that ship and every minute it would zig-zag somewhere else so the submarines couldn’t get a beat on you. We went over to the continent and landed at, it was, yeah, it was in Holland, but I can’t remember the name of the place, a small port. But it was all littered with sunken ships in there, we had to zig-zag around to get in. And then I got, oh, sent to Nijmegen [Netherlands] I guess it was. Wait, no, to Ghent, to Ghent in Belgium, at the Leopold Barracks. And again, we were lined up there and being singled out, half a dozen of you go to this regiment and you go to this regiment and the sergeant come out and he says, “Any of you guys know how to work in an office?” Of course, that was right up my alley, so I said, “Sure.” He says, “Can you type?” And I said, “Yeah, 60 words a minute.” So he says, “Come here, we need you.” So from there on, I sat behind a typewriter and typed my way across the war. So I volunteered to work the night shift, so I got on at 10:00 at night and worked for three or four or five hours and had a coffee breaks at about 1:00 in the morning, and we went into the cookhouse there and it was all well lit inside, but outside, it was pitch black. And there was kids waiting outside to see if there was any leftovers. So another pal of mine and myself, we used to pack up a bunch of sandwiches and anything else we could grab and give it to the kids waiting outside, because they were starving, absolutely. One of our trips was to Berlin. We were there for about four or five days. And we stayed with some British Army outfit there, and it was then that I had the opportunity to tour around Berlin and got the chance to go down and see Hitler’s bunker, which was down three flights of solid concrete. And there was no lights, so the gal, it was a French gal that was showing us around, anyway, she had her flashlight and showed us around there, and I got into Hitler’s bedroom and I couldn’t find anything to lift, so I took the light switch off the wall. And then coming out, right up, I came up three flights of stairs and it was just a bombed out mess there. Outside, the potholes was full of water and muddy and everything. And here, in one of these mud holes was the statue of Venus. So my friend and I, Matt, he said, “Let’s take that back to Holland with us.” So we hoisted it into the truck, all dirty and muddy, you know. Weighed about 300 pounds, so we put her in the truck and took her back to Holland and washed her off and polished her up. (laughs) And she sat in our orderly room for the rest of our days there. But when it came time to go home, we thought, gee, you can’t leave Venus here. So we had the carpenters make a crate for her, and we took it down and borrowed a Jeep and took it down to Antwerp [Belgium] and made sure it got on a ship headed for Canada. And it had my friend’s name on it, Gordy Mattingly from Sarnia, Ontario. And but that’s the last we heard of it. It got on the ship as far as we know, it was waiting to be loaded there and it never got to his place anyway. So where Venus ended up, and whoever got it, doesn’t know the history behind it.