"I participated in some of the now-famous battles – the Battle of Normandy, the Falaise Gap, the Scheldt, the Battle of the Rhineland and the crossing of the Rhine River…" See below for Mr. Reidy's entire testimony. Please be advised that Memory Project primary sources may deal with personal testimony that reflect the speaker’s recollections and interpretations of events. Individual testimony does not necessarily reflect the views of the Memory Project and Historica Canada. 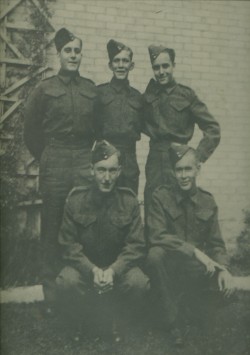 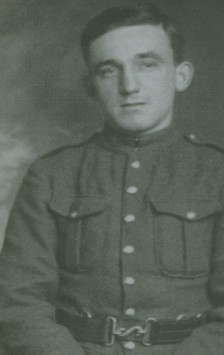 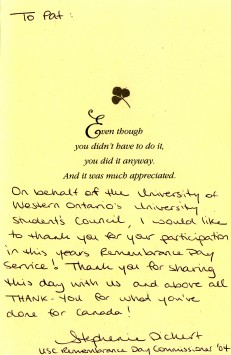 My name is Pat Reidy and I live in London, Ontario, and I'm a veteran of World War II, and also of the Korean War. I grew up in a family that has a long military history in its background, beginning with my great-grandfather who participated with the militia in the Fenian raids in the frontier in 1867. My mother's father was a career British garrison soldier who came to Canada in the mid-1800s. My mother's one brother was killed in the First World War in the Battle of Jutland on a British naval ship, and her other brother served with my father with the 2nd Canadian Machine Gun Battalion and took part in some of the famous battles, such as Vimy, Somme, Canal du Nord, etc. in the First World War.

I enlisted in the reserve in 1940 at age fifteen with the Canadian Fusiliers, City of London Regiment [today the Royal Canadian Regiment]. When I turned sixteen in January of '41, I enlisted in the Canadian Active Service Force. In the summer of 1941 I proceeded overseas with the 3rd Canadian [Infantry] Division and served in England for the next three years. I went to Normandy with the invasion forces in 1944, along with my two older brothers who were members of 2nd Canadian [Infantry] Division. I served through France and into Belgium, and the liberation of Holland, and on into Germany, where I was when the war came to an end. I participated in some of the now-famous battles – the Battle of Normandy, the Falaise Gap, the Scheldt, the Battle of the Rhineland and the crossing of the Rhine River, etc. We wound up in Nijmegen for the winter of 1944/45, after we had relieved the American Airborne who were dropped there to secure the bridges across the Maas River and the Rhine. I returned home from overseas after being away for over four years. I got home on the 23rd of October 1945, and I was approaching my twenty-first birthday.

I got out of the Army in December of '45 and went to work in civilian life, and married in August of 1950. The Korean War broke out and I re-enlisted. It was the 2nd Battalion, Royal Canadian Regiment, and went to Korea in the spring of 1951. I served for a twelve month period, returning back home to London in 1952. In September of that year I took my discharge and returned to civilian life, and I became affiliated with the Canadian postal system, and I served thirty-five years as a letter carrier and I union representative for the Letter Carriers' Union of Canada, and retired in 1989.