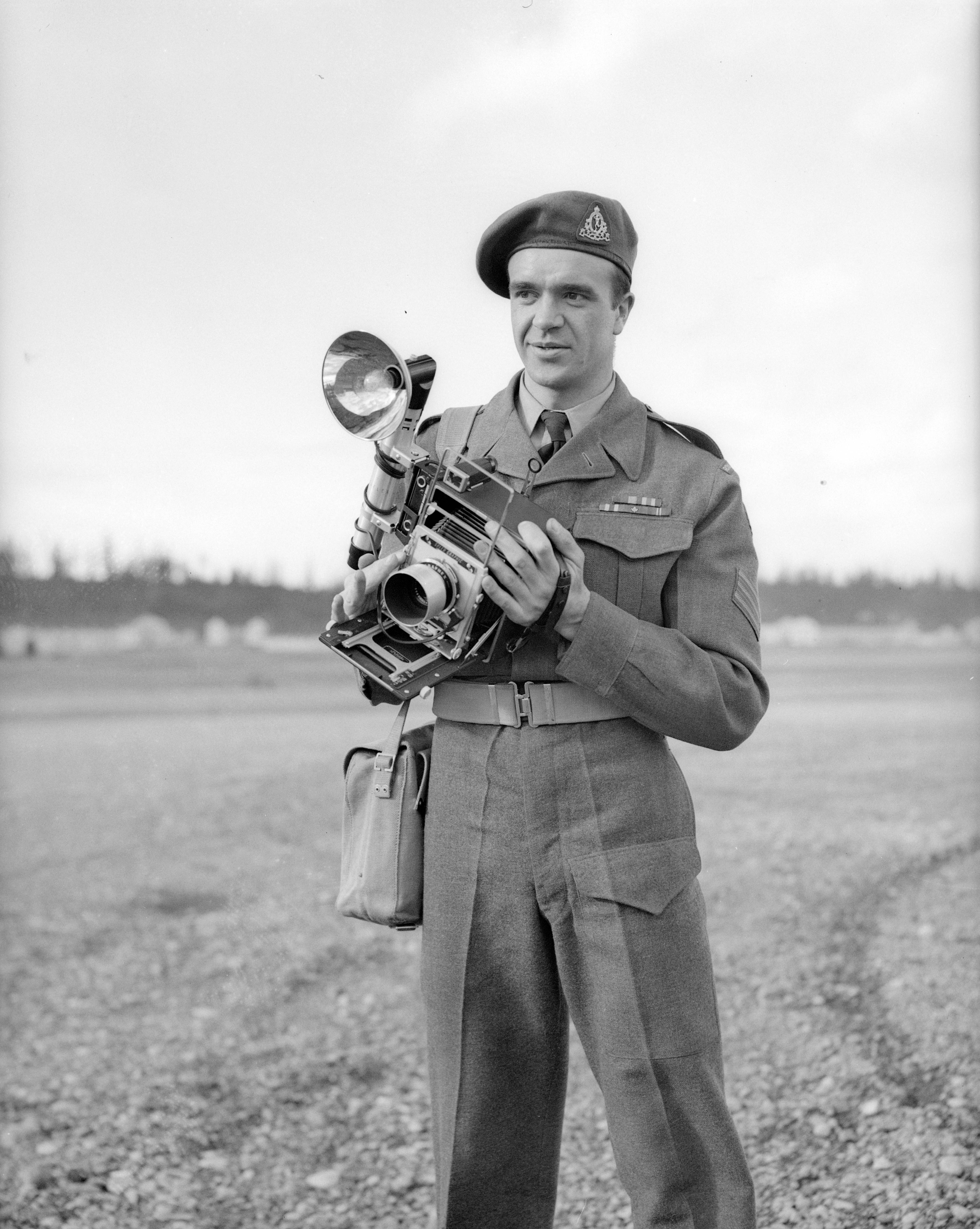 I went across and got a picture of Major Liboiron* and his FOOs, forward observation officers, with him in their trench, then carried on up the hill, 166.  And I got to this one spot, where there was about half a dozen, I guess it was a section of Van Doos** infantry stretched out just below the crest of a hill.  They were all loaded up with their bayonets bounded, in their rifles, and I thought maybe they were going to go right over top of the crest.  I stood below them.

A sergeant came by and he said, “Look, if you want, I’ll take you to where the farthest our troops got in the trench, because there was a machine gun that was keeping our troops down.  And I’ll show you where we had one of our men who...” The trenches were zigzag, and he was going to take me to this one place where one of our soldiers was – went out past the zigzag and got shot.  And I thought, “Well, what the heck, there’s nothing there but to get a picture of a trench.” So, they climbed that, but...

But, anyway, one of the infantrymen looked down.  Here they were all loaded with the bayonets on their rifles.  Here I was standing below them, loaded with a 4x5 Speed Graphic camera.  And he said, “Hey, we have to be here.  What are you doing here?”  I shrugged my shoulders and said, “Well, how are the people back home going to know what you’re doing here?”  And that seemed to be satisfactory.

Then I noticed at the far end, of these guys that were stretched out, the ridge sort of flattened out, and there was some shrubs, and a couple of infantrymen were lying down in the shrubs.  So, I went over there and squatted and got a few shots and one of them was firing to the top of the hill, but it was about 100 yards ahead of us.  He was shooting into the bunkers that our artillery and tanks were firing at.  I got shots of him lying down, shooting and, the tanks – of the artillery blasting the dugouts, about 100 yards ahead of us, there’d be dugouts, and this one rifleman was shooting up there. Then all of a sudden, some infantrymen came running from the other side of the ridge to our side, and all of a sudden when these guys came over the ridge, a machine gun opened up behind us.  Here we were, thinking we were safe behind this ridge.  So, I missed the first guy coming over the ridge.  Then I moved over and got a picture of a guy stretched out on the ground, just below the ridge, and one of the guys running back across the ridge when the machine gun opened up.  Then I moved to another spot, and a couple of infantrymen came running over the ridge.  I remember the machine gun bullets sounded so close with these guys ran past me.  They ran by about six feet, past me, beside me I should say, to my side of the ridge.

That particular evening I had made arrangements with Major Don Holmes, who is the commander of C Company, Royal Canadian Regiment, to take photographs of his unit, that was taking a night raid that night.  So, I went there and took photographs of them having their last meal, and putting on their – blackening their faces, and checking their equipment, and Major Holmes briefing the people involved in the company, before going out, and then checking their equipment out before going out.  They invited me to go out with them.  It occurred to me that this would be ridiculous, because, out in the black, I wouldn’t be able to do any focusing, and to get anything, I’d have to use a flash, and I’d probably give away wherever our troops were.  So it would be ridiculous for me to go out.  So I stayed, and I went up, the top of the hill, back of where the company went out from, and sat behind the machine gun that was shooting tracers in support of the raid. And, they were shooting tracers. So I had my 35 millimetre loaded with Kodachrome,*** so I sat there, propped it up against my knees and got photographs of these tracers going across the valley.

Then when they started coming back, I went back down and starting taking photographs, of them coming into the Regimental Aid Post.  You got pretty busy with casualties being brought in.  And then there was a line-up of casualties outside of the entrance to the Regimental Aid Post.  And I noticed this one individual, leaning up against the sandbag hilltop bunker, which was Regimental Aid Post, RAP, and I noticed this one soldier leaning up against the sandbags, and I wanted to get a picture of him – I didn’t want to use the flash.  So all of a sudden, here he was next to the entrance to the RAP, the black, associated with death, entrance to the RAP.  It was just starting to get daylight.  So I thought, “Well, if I don’t get this photograph of this soldier now, I won’t get it because he’ll be in” – he was next to go inside, to be taken care of.

So I stepped back as far as the slope of a hill would allow me, and focused on the seam of this shirt, because it seemed to me that was about the same focal length, or plane, as his eyes, which to me was the most important part of the photograph.  His eyes with the expression of what many soldiers referred to as the thousand-mile stare.  And I wanted that to be sharp.

So, with the camera shutter set at 125th, and the lens wide open, I think 5.7 was the largest aperture that the Speed Graphic had.  I propped my elbows – well, I started focusing first, and the soldier got an expression of disgust and pushed himself away from the sandbags as if to leave.  I went up with my hand and said, camera in one hand and the other hand up in the air, and I said, “Oh, please, go back to where you were?”  It didn’t take much convincing.  He just was so pooped he just dropped back.  And then he called out, “Where do you want me to look?”  Well, I recalled he was more or less looking over my left shoulder, so I said, “Over my left shoulder would be fine, please.”

So, that’s where he looked, and I back up with the camera, focused on the – refocused again to make sure I had the photograph sharp, and then dug my elbows into my ribs, the camera up against my forehead.  I was using the open frame finder, not the optical finder, open frame finder, and squeezed the shutter.  And the strange part of it is, that normally a picture as important as that one seemed to be, I would take a second one.  But somehow or another I felt that it was there.  And it was there.

***A type of film, loaded into a camera