"It was very secretive, and we were not allowed to tell anybody the frequencies or if we were ever caught by the enemy, to divulge anything about radar."

"It was very secretive, and we were not allowed to tell anybody the frequencies or if we were ever caught by the enemy, to divulge anything about radar." See below for Mr. John's entire testimony. Please be advised that Memory Project primary sources may deal with personal testimony that reflect the speaker’s recollections and interpretations of events. Individual testimony does not necessarily reflect the views of the Memory Project and Historica Canada. 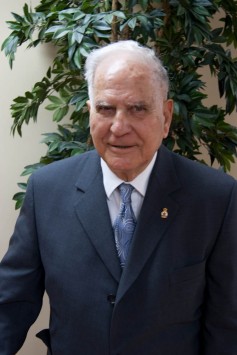 I was signed up as a radar technician in the early part of 1942, and we went to exhibition grounds in Toronto for basic training, as an aircraft second class. And in the fall, went over to the University of Toronto for our radio test. And we had to put together what they called a pentode radio, that’s a five tubed radio. They had all the pieces in a box, so the tubes and resistors, capacitors, things like that. And they took two of us together and we had to make a radio out of it so that it would work. And we succeeded in that fine, and then after that, we graduated, only about 40 to 50 percent of the class graduated from there because it was a pretty tough thing. None of us knew anything about radio, putting it together, except to turn a knob and you get a station. After that, we went to Clinton [British Columbia] for six weeks I believe it was, I’m not positive but I think it was six weeks, where we learned about radar there. And we were told the frequencies of certain equipment and how we would work on it and do it and it was very secretive, and we were not allowed to tell anybody the frequencies or if we were ever caught by the enemy, to divulge anything about radar, where we were going or anything like that. So they had a date for me to go to Halifax and go over to Great Britain and that was it until the early part of 1943, they sent us to Halifax to go overseas to Great Britain. And they dropped me off, just one of us at a time, at a Royal Air Force [RAF] station. And this place was in a place called Wigsley in Lincolnshire, 1654 conversion unit. And that’s where I met another English corporal and he showed me the ropes and things like that. There was a sergeant in charge of our section, radar section, Sergeant Mervin. And after about five months, they made me a corporal. Just before the D-Day, I’d say a few months before D-Day, in the latter part of 1943, they said we were going over, they wanted a corporal and six to eight men, two corporals and the sergeant. We were going over there to destroy a building, a radar building. And that’s what they told us, and I went through a training. I forget where it was at, I think it was a placed called Syerston, put aside for training, and we went through a pretty rough training schedule there with machine Bren guns and 303s [rifles] and bayonets. And one thing that stands out in my mind was we had to cross a river, this is cute, and it was about, oh, 150 feet wide. And they said, “Now, it’s not too deep in the middle, you can walk across.” We said fine, we straggled in a line and halfway across, the water was up to my mouth. And the sergeant hollered back, “Don’t worry, that’s as deep as it gets!” All of a sudden, I felt somebody on my back. I said, “What the hell’s going on!” And somebody was on my back, and he said, “Don’t worry,” he says, “I couldn’t breathe.” It was a little Welshman who was in our crew. He jumped on my back because the water was too deep for him, he was only about five foot two. So we got across alright and he thanked me and he said, “I couldn’t help it, I’m sorry.” But it was the cutest thing I’ve, I wish there was a picture taken of it. Here he was on my back with one hand up hanging on to me and another hand to hold his rifle up because we couldn’t get our rifle wet. And I would have laughed if somebody had taken a picture of that. We were off by ourselves a bit at the end of one of the runways, and of course with planes taking off day and night, it got to be a bore. So I had, let’s see, about six guys were under me and they did a darned good job. We got a couple more Canadians, and one day, one of the sergeant came in with a girl. He said, “She’s trained, use her.” I said, “Oh, great!” So I put her on one of the inspection tours. She did alright, she was a pretty good girl. She knew what she was doing. The war was over before very long and then we had a big party of course. I agreed with my girlfriend that, when she said she wouldn’t go over to the colonies, I said, “Well, when I leave here, that’s it. Well, I won’t even write you and or keep in communications, so what’s the point.” So we never wrote to one another, I have no idea what ever happened to her or what. But she was a very nice young lady. She was in the WAAF of course, Women’s Auxiliary Air Force. She was a motor transport driver, an MT driver. Oh, she brought somebody over to the section one day and I met her that way and there was another corporal in our section and he had a girlfriend too, a Canadian too, incidentally, from Whitehorse. Very nice fellow. And we chummed around together, the four of us. We had a big party in the mess that night and had a couple drinks of course and said goodbye to everybody. It was a great, great night. I know I was happy, after almost three years, of getting out of there. Yeah.