"The children hadn’t seen chocolate during the war. There were a lot of young children that had never seen it before. There was a lot of misery during the war." See below for Mr. Querry's entire testimony. Please be advised that Memory Project primary sources may deal with personal testimony that reflect the speaker’s recollections and interpretations of events. Individual testimony does not necessarily reflect the views of the Memory Project and Historica Canada. 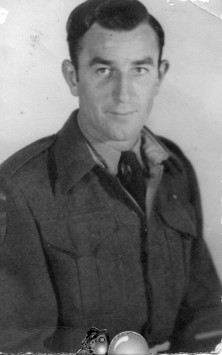 I was born on a little farm. I was the eldest of the family; there were nine of us. I didn’t receive a lot of schooling. I stopped my studies in order to help my parents. There wasn’t any work close to where we lived and I saw friends of mine leaving to join the Army. My cousins and I decided to join the Army out of patriotism. We left for Rimouski and enlisted there. We went to Quebec City, where we underwent a bit of training.

There was a guy named Willy Hunt from Gaspé who was a part of our gang. There were seventeen of us who joined the uniformed ranks on the same day. He advised us to join the [Canadian] Forestry Corps. As a veteran of the First World War, he had heard people talking about this regiment that was headed overseas but that would not be at the front lines. We all joined that regiment. We’d cut wood and load it onto cars so that would take it into the towns where it was needed. Other places needed wood for the mines.

At that time, there was a lot of bombing throughout England. It destroyed everything. For the Forestry Corps, that was our main source of work. There were lumber mills. There were 200 men in each company. In the Forestry Corps, I didn’t have any complaints. We were comfortable. We had better rations than the companies that were in the line of fire. We got leave every three months. We went to France and Belgium. In March 1945, they transferred us to the Black Forest in Germany.