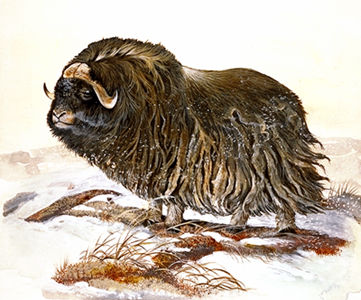 Muskoxen were saved, first through game laws, then by the establishment of the Thelon Game Sanctuary, NWT (1927) (artwork by Jan Sovak, 1989). 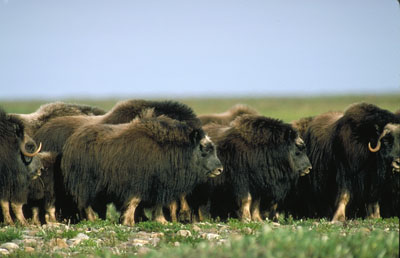 When confronted by wolves or humans, muskoxen line up facing attackers, pressed tightly together with calves wedged in between (Corel Professional Photos).
PreviousNext 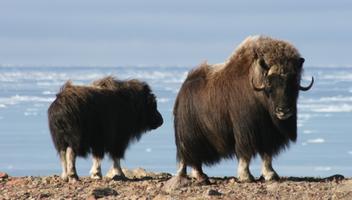 Muskoxen are related to mountain sheep and mountain goats. They have humped shoulders and short legs, stand about 130 cm high, and weigh 180-270 kg. In midsummer the thick layer of insulating underwool (kiviat) is shed, giving muskoxen a very shaggy appearance.

Muskoxen live in small herds in summer and in larger groups (60 or more) in winter. Herds are loosely organized but a dominance hierarchy is present among bulls, cows and subadults. Synchronized cycles of alternating feeding and rumination keep the constantly moving animals together.

Males may challenge the dominant bull for herd leadership. After exchanging deep, roaring bellows, opponents show the broad bases of their horns and rub the preorbital glands against their forelegs in a ritualized display. They then back up and gallop forward to meet in a series of head-on clashes. Head-to-head scuffling may then determine the winner.

Prolonged courtship begins in late July as bulls assess the females' reproductive state. In Aug, courtship with increasing contact leads to successful mating. Females produce a single calf the following year in Apr-June. Though suckling may continue throughout their first year, calves begin feeding on plants within a few weeks of birth. The playful calves spend most of their time together, returning to the mothers only for suckling, travel or safety.

When confronted by wolves or humans, muskoxen line up facing attackers pressed tightly together with calves wedged in between. If surrounded they form a solid ring and may charge out at the enemy. When harassed they stampede, sometimes leaving behind stragglers that are more easily killed by wolves.

Muskoxen dig craters in the snow with the forehooves to reach winter forage. Dominant herd members displace others from craters already dug. A wind-hardened crust is broken by pounding with the chin. In severe storms, muskoxen remain lying down for extended periods. Unusual snow conditions can lead to extensive deaths by starvation.

Overhunting by explorers, fur traders and whalers led to a ban on hunting from 1917 to 1970. Muskoxen were protected further in 1927 with establishment of the Thelon Game Sanctuary in the NWT. Inuit and sports hunting is now permitted in some areas. Muskox habitats are affected by resource exploration and development, and there are few places in Canada where muskoxen and their habitat are fully protected.