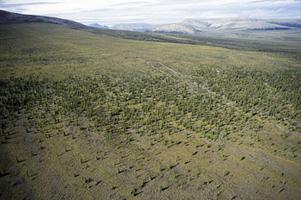 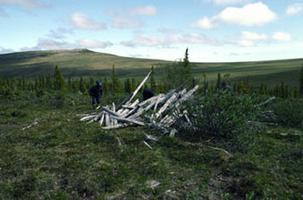 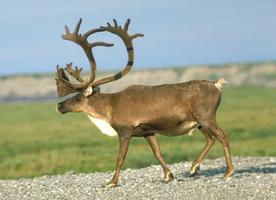 The caribou is the only deer in which both sexes have antlers, though those on the female are smaller (Corel Professional Photos).
PreviousNext

For thousands of years, caribou has been a mainstay for people living in the world's northern regions. They supplied the majority of the food; hides for making clothing, footwear and tent coverings; rawhide rope; sinew for sewing; and antler and bones for making many types of tools. Because of the critical importance of caribou to the Gwich'in people of the northern Yukon and Alaska, the people developed several techniques to harvest these animals (see Caribou Hunt). The most technologically sophisticated is the caribou fence complex. Ten of these complexes have been studied by archaeologists in the northern Yukon and nearly 40 others have been recorded in adjacent Alaska. The oldest surviving fences date to the early 1800s, but oral history suggests fences may have been used for thousands of years; they were last used about 1910.

Built of logs near the treeline, fence complexes consisted of a narrow U-shaped trap or corral about 300 m long by 15 m wide. Traps were open on one end and had more than 10 km long funnel-like fences that converged on the opening. These drift fences were used to divert small herds of animals toward the trap where they were caught in snares. There could be 100 or more snares, each of which consisted of a loop caribou rawhide rope or babiche that was suspended over a stout framework (about 1.5 m high and 2 m long). These snare sets extended out from the trap's side walls, which were up to 2.5 m high and heavily built to withstand the forces of panicking animals. Drift fences were nearly as strong near the trap, but became flimsier as the distance from the trap increased. In open tundra or on barren ridges, hunters used a row of low tripods or single poles with a "head" of moss on top. Even when spaced 5 to 10 m apart, caribou will try to avoid a line of these human-like figures by moving along them rather than trying to cross them.

The construction and operation of a fence complex required several families, comprising perhaps 15 to 40 people, usually under the direction of a fence owner who would share the proceeds of the hunt. Owners were recognized leaders who were respected for their hunting and other skills. In operation, the drift fence was ingeniously positioned to intercept caribou herd movements often by crossing rocky ridges, which are features that caribou like to follow when moving from place to place. Children and women were strategically placed near these ridge crossings to frighten animals and make them move toward the trap. Once in the trap, snared animals would be speared by hunters, and then removed for butchering in tipi-like features called shya. Families lived in villages or meat camps about a kilometre away from the trap. Here they had their skin tents and stored their surplus meat and equipment on caches elevated above the ground to protect them from marauding bears or wolverines.