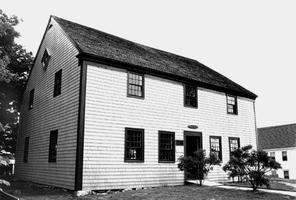 Located in Barrington, NS, this meeting house was built in 1765 and was of a type commonly used by New England Congregationalists (photo by Lany Turner).

The Old Meeting House in Barrington, NS is Canada's oldest nonconformist place of worship. It was built in 1765 for a number of families from Cape Cod who had moved to Nova Scotia to settle the Barrington area. It was also used for town meetings and elections, and serves as a reminder of some of Nova Scotia and New England's shared history and traditions.

The Barrington Woolen Mill is a typical late-19th-century mill. Established in 1882, the mill operated up to 1962. It is perhaps most notable for its excellent collection of looms, spinning jennies, carding machines and other early mill equipment and machinery. The mill has been operated as a provincial historic site since 1968, and the meeting house was acquired by the province in 1979. Both are open to the public from early-June to the end of September.