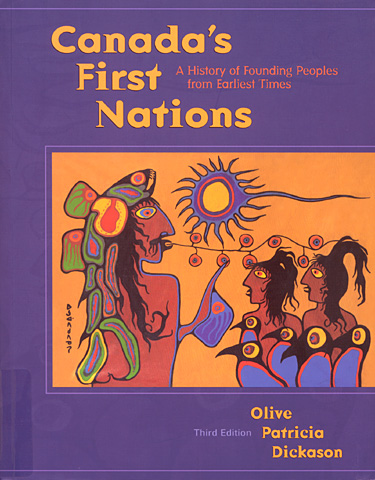 Olive Dickason’s book Canada’s First Nations: A History of Founding Peoples from Earliest Times (1992) was awarded the 1993 Sir John A. Macdonald Prize for best scholarly book in Canadian history. Dickason was the first scholar in Canada to receive a PhD in Indigenous history.

Dickason and her sister Alice went to a private Catholic school in Winnipeg until the stock market crash in October 1929 ended their father’s banking career. After an unsuccessful attempt at gold mining north of Winnipeg, he went broke. Dickason was 13.

The family eked out a living in the bush in northern Manitoba, where Dickason and Alice learned hunting, fishing and trapping from their mother. A Scottish intellectual neighbour introduced Dickason to classic literature, philosophy, Marxism and London newspapers.

At age 18, Dickason went to Winnipeg by boat with only the clothes on her back. Once in the city, she hired herself out as a maid and tried to sell magazines door to door in rural southern Manitoba and Saskatchewan. But it was the Depression and farmers had little money.

Olive Dickason completed grade 10 by correspondence but due to the Depression, her father could not afford to enroll her in grade 11. After she impressed maverick priest Père Athol Murray with her intellect, he accepted her as the lone girl in his all-boys namesake Notre Dame College in Wilcox, Saskatchewan.

Mentored by Murray, Dickason studied for a bachelor’s degree while freelancing for the Regina Leader-Post. She graduated in 1943 from Athol Murray College of Notre Dame with a Bachelor of Arts in French and philosophy.

Olive Dickason began a job as a general assignment reporter at the Regina Leader-Post in 1941, where she remained until 1946. While working in Regina, she met some of her mother’s relatives and became aware of her Métis roots for the first time.

When Dickason and her husband moved to Montreal, she spent three years freelancing, mostly for industrial magazines. After her marriage ended, she began working as a general reporter for the Montreal Gazette, then became their women’s editor. In her new job, she visited New York’s fashion wholesalers and haute couture hot spots but remained unimpressed by high-status life. Dickason considered the fuss over the latest clothes and accessories trivial.

Despite her position at the Gazette, Dickason spent years struggling with her ex-husband’s unpaid debts. Due to Dickason’s dire financial circumstances in the 1950s, her children spent seven years with a foster family in a rural area outside Montreal. She fought to keep all three girls together and visited them regularly. When Dickason’s oldest daughter was 12, the girls were returned to her care.

Career at the Globe and Mail

In 1955, Olive Dickason moved to Toronto, where she became women’s editor at the Globe and Mail. For 12 years, she wrote about local and international fashion trends, although she still had some contempt for the topics. As editor, she nurtured young journalists Michele Landsberg and Barbara Frum, who later became Canadian media success stories.

At age 47, with her children grown, Olive Dickason left her Globe job and took several history courses at the University of Ottawa. While studying, she did public relations for the National Gallery of Canada. Years after viewing some early Indigenous artifacts on loan to the gallery, she said, “The pieces spoke to me. I felt like I knew all about them. I guess it’s what they refer to as racial memory.” (See also Repatriation of Artifacts.)

This new awareness inspired her to research Indigenous history in North America. At age 50, Dickason applied to a Master of History program at the University of Ottawa. It was 1970: mature students of her age were almost nonexistent. But Dickason was determined to improve the historical record of Canada’s First Nations and write about Indigenous Canadians in French Canada.

Until then, not one history PhD candidate had written a dissertation on First Nations history in Canada. The scholarly field of Indigenous studies barely existed, and she had trouble finding a thesis advisor. Later, Dickason recalled a prevalent attitude at the time: “There’s no historical evidence. The Indians were an oral society and without written documentation, you can’t have history.”

Dickason completed her master’s thesis Louisburg and the Indians: A Study in Imperial Race Relations 1713-1760 and graduated in 1972 with an MA. But she still felt driven to prove that thriving, productive Indigenous civilizations had survived for centuries in North America before Europeans arrived.

Dickason received a PhD in Indigenous Canadian history in 1977. The University of Alberta Press published her doctoral dissertation The Myth of the Savage and the Beginnings of French Colonialism in the Americas in 1984.

Following her PhD, Olive Dickason began lecturing at the University of Alberta and received tenure as a full professor in 1985. Her scholarly articles and significant books, now part of curricula across the globe, brought her recognition as Canada’s foremost expert on Indigenous and Métis history.

DID YOU KNOW?
In 1993, the same year that Olive Dickason received the Sir John A. Macdonald Prize for Canada’s First Nations (1992), she was the NDP candidate for the riding of Edmonton-Rutherford in the Alberta provincial election. Percy Wickman, the Liberal incumbent, won the riding.

Dickason also edited The Native Imprint: The Contribution of First People’s to Canada’s Character (1995) and wrote freelance Globe and Mail reviews of books such as Stolen from Our Embrace, which addressed the federal government’s policy of placing Indigenous children in residential schools.

Dickason retired at age 72. She died 12 March 2011 in Ottawa and is buried in that city’s Beechwood Cemetery.

DID YOU KNOW?
When Dickason faced mandatory retirement in 1985, she filed a complaint with the Alberta Human Rights Commission against the University of Alberta. She claimed the university’s mandatory retirement policy violated the province’s Individual’s Rights Protection Act. An appointed board of inquiry decided in Dickason’s favour and ordered that she be reinstated. The Court of Queen’s Bench upheld that decision, but the Court of Appeal overturned it. In a 4–3 decision, the Supreme Court of Canada ruled against her in 1992 in Dickason v. University of Alberta. She continued doing research as a sessional instructor.

Dickason contributed enormously to Canadians’ understanding and knowledge of Indigenous and Métis people. As a journalist, professor and scholar, she served as an inspirational role model for students, women and her Métis community.

The Gabriel Dumont Institute has a collection of Dickason’s letters, articles and related materials. An exhibit at Quebec’s Canadian Museum of Civilization pays tribute to Dickason and her books.

At the University of Calgary, the First Nations Student Association and The Native Centre present the Dr. Olive Dickason Award to an Indigenous student who has overcome extreme challenges to achieve success and graduate.

The University of Alberta dedicated a room to her in 2017 while Trent University in Peterborough, Ontario, has the Olive Dickason Reading Room for students enrolled in Indigenous Studies.