Oshawa, Ont. City incorporated in 1924 and located on Lake Ontario, 53 km east of Toronto. In 1778 the first settlers in the area, United Empire Loyalists, were given Crown land. In 1850 the community was declared a village, and the name Oshawa was adopted. The growth of Oshawa to a population (1986) of 124,000 is due in large measure to the establishment and expansion of Robert Samuel McLaughlin's Carriage Works (1892, General Motors from 1918). McLaughlin's palatial home, Parkwood, built in 1915, was the scene of many musical evenings during his lifetime. McLaughlin died in 1972 but Parkwood, proclaimed a historic site in 1990, has continued to be used for chamber music and recitals.

In 1870 a town band was formed, and it was named the Oshawa Citizens Band in 1899. In 1920 the band became associated with the Ontario Regiment and was named the Regimental Band. With financial assistance from McLaughlin a bandroom and bandshell were constructed 1940-2 in Memorial Park and expanded in 1958. The band was re-named the Oshawa Civic Band in 1968, and in 1991 continued to give concerts in the park.

The Oshawa Organ and Melodeon Manufacturing Co was formed in 1872 but moved in 1873 to Bowmanville and in 1875 was renamed the Dominion Organ and Piano Co. The Oshawa Piano & Cabinet Co was another instrument manufacturer active in the city. In the early 20th century Oshawa was visited by musical organizations from elsewhere in Ontario and from Wales, and music study groups were formed. A General Motors Music and Dramatic Club was active under Leslie Unnitt's direction.

In 1932 Reginald Geen, organist of Simcoe United Church, gathered some music teachers together for meetings, but the Oshawa branch of the ORMTA was not incorporated until 1938; the branch numbered 53 members in 1991. The Oshawa centre of the RCCO was initiated in 1947 with Charles Walker as first chairman. Two Oshawa members have served as national president of the RCCO: Reginald Geen (1951-3) and Margaret Drynan (1982-4).

The Oshawa Symphony Orchestra (see Orchestras), formed in 1957, was composed originally of amateur players but later developed into a semi-professional community group consisting of local players and some students from the University of Toronto. Winston Webber became the conductor in 1979 and continued in that position in 1991. The Concordia Pops Orchestra is an amateur organization formed in 1972 to play light classical music; the conductor in 1991 was Andrew Uranowski.

The Oshawa and District Council for the Arts, formed in 1963 on behalf of the Chamber of Commerce, sets up communication between arts groups, co-ordinates performing dates, and issues a monthly calendar of events. Yearly festivals have been presented. The Oshawa Kiwanis Club also began in 1971 to sponsor an annual music festival. For two weeks in the spring it brings in adjudicators, and winners are awarded trophies and scholarships.

Many choirs have been active in Oshawa over the years. The Motor City Choir (1931-50) was inaugurated and conducted by Reginald Geen. The Oshawa Chorale Society, a group formed in 1954 to present light operettas, started in Bowmanville but moved soon afterwards to Oshawa under Hugh Martyn's direction. Each year it performs Gilbert & Sullivan and other light operettas. The conductor in 1991 was Carl Hammond. The Canterbury Singers of Oshawa (1953-68) was an a cappella group of 16-18 singers under Margaret Drynan's direction. Its repertoire consisted of music of the Tudor period, the Russian school, and works of Healey Willan and of the conductor. The Barbershoppers, formed in 1949, have presented two or three concerts each year; quartets from the parent group also go on tour. The Sweet Adelines, a women's group, performed 1957-87. The General Motors Choir (formed 1960) has been led by Elsie Dobson (1960-74) and Jan Kinsman (from 1974). The Oshawa Festival Singers, a 50-voice girls' choir, was formed in 1972 by Elsie Drygala. It has been awarded many prizes and has given concerts in Oshawa and elsewhere. Drygala was succeeded in 1988 by Lorie Easton-Flynn.

The Oshawa Folk Arts Council was formed in 1961 to bring together ethnic cultures in the city; it sponsors various musical and cultural events, including a Fiesta Week with pavilions from many countries providing food and entertainment from their individual homelands.

Prominent school music supervisors have included Leslie Unnitt, Leonard Richer, Wallace Young, Jean Cook, and Margaret Drynan. Eastdale Collegiate Institute is the only school in the city with a theatre auditorium; the Oshawa SO concerts are held there.

In 1979 the former police building was refurbished as an interim arts centre, and the courtroom was converted into a small auditorium. In 1987 a completely modernized building was opened as the Arts Resource Centre; it houses offices, meeting rooms, and a rehearsal space used by the Oshawa SO. 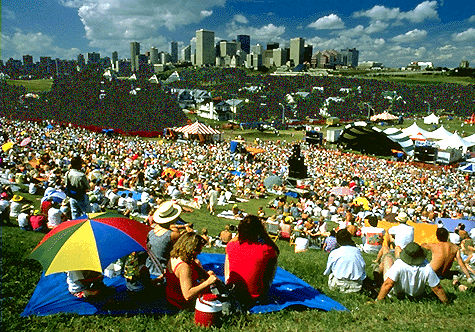