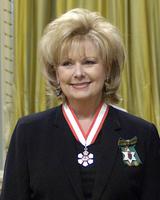 Pamela Wallin, television broadcaster, diplomat, journalist, producer, writer (b at Wadena, Sask 10 April 1953). Before Wallin entered journalism, it was already her desire to bring about change and improve society. While attending the University of Saskatchewan, she helped establish the University Women's Centre, where she engaged herself with the public and dedicated herself to women's issues. After graduating with an honours BA in psychology in 1973, she joined the province's Human Resources Development Agency in Prince Albert as a social worker. In 1974, while working with inmates in the Prince Albert Penitentiary, she was asked by CBC Regina producer and former university acquaintance John Ridsdell to fill in as host for Radio Noon's phone-in hour, which she did for 3 months. Seeing first-hand how radio could better equip her with the tools she needed for social change, Wallin left her job at the penitentiary and entered radio journalism full-time.

Despite not having any prior journalism or broadcasting experience, Pamela Wallin quickly moved through the ranks of radio, print, and television news media. In 1975, at the encouragement of CANADIAN BROADCASTING CORPORATION (CBC) broadcaster Elizabeth Gray, Pamela Wallin left her position as producer for CBC radio's Saskatchewan Today to become story editor for the morning program at CBC Ottawa . This was followed by stints as researcher for national CBC radio programs Sunday Morning in 1976 and for 3 years as producer for As It Happens.

In 1979, Wallin entered print journalism by joining the Toronto Star, first as a story editor in Toronto, and soon afterwards as a political reporter in Ottawa. It was in Ottawa that she first appeared on national television as a guest on CTV's political panel program Question Period. In December 1981, she returned to Toronto to join Norm Perry as co-host of CTV's national morning program Canada AM.

Pamela Wallin gained notoriety in 1982 for being the only female Canadian television journalist to report from Argentina during the Falkland Islands war. In 1985, she became Canada's first female network television Ottawa bureau chief, a position she held for CTV until 1988. Following three more years in Toronto as news anchor on CTV's weekend evening news cast and occasionally as co-host for Canada AM, she accepted an offer by CBC in 1992 to join Peter MANSBRIDGE as co-host of its new flagship news program Prime Time News. However, acrimony between Wallin and the program's producers, and a strategic re-evaluation of the evening news by the corporation, eventually led to her bitter and public dismissal from the program in April 1995.

Pamela Wallin has shown an exceptional ability to recover from professional and physical setbacks. In 1995, she formed her own successful production company and began to host several eclectic live interview programs for CBC Newsworld and later CTV. A tireless worker, she also published three books between 1998 and 2003, including her best-selling memoir Since You Asked. On 1 December 2001, in response to the terrorist attacks of 11 September 2001, Wallin hosted the "Canada Loves New York" rally in Manhattan attended by over 20 000 Canadians. In recognition of this and her many other achievements, Prime Minister Jean CHRÉTIEN appointed Wallin on 25 June 2002 to a 4-year term as Canadian Consulate General in New York City. On 6 March 2007 Wallin was appointed Chancellor of the University of Guelph.

Pamela Wallin has received numerous honours throughout her career, including the Gordon Sinclair Award for best overall broadcast journalist in 1992, Broadcaster of the Year Award presented by the Radio-Television News Directors' Association in 1994 and the Saskatchewan Order of Merit in 1999. She was appointed as a member of the ORDER OF CANADA in 2007 and as an officer of the order in 2008. She has also received more than 10 honorary degrees granted by Canadian post-secondary schools. In 2009 she was appointed to the senate and was also made an Honorary Colonel in the Canadian Air Force.