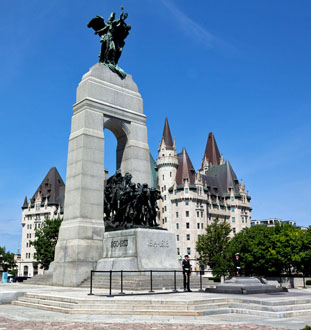 Corporal Nathan Cirillo was shot and killed while on ceremonial guard duty here, at the National War Memorial in Ottawa on 22 October, 2014. (photo by James Marsh). 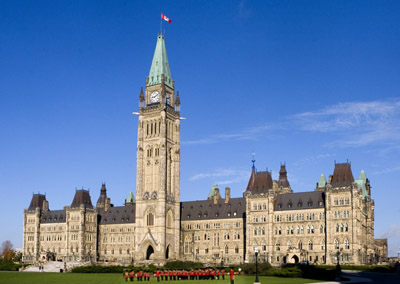 The Centre Block of Parliament Hill. On 22 October, 2014, a gunman burst through the main entrance below the Peace Tower, and began shooting. (photo by James H. Marsh). 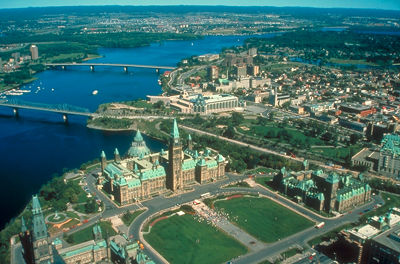 With the Parliament Buildings in the foreground (Corel Professional Photos).
PreviousNext

The shooter, Michael Zehaf-Bibeau, was a 32-year-old homeless man who struggled with cocaine addiction. In the fall of 2014, he had been living at the Ottawa Mission shelter after a summer working in the Alberta oil patch. Born in Canada to a Québécoise mother and a Libyan father, the shooter held dual Libyan-Canadian citizenship and had converted to Islam in adulthood after being raised a Catholic. He had a criminal record of petty crimes including drug offences.

After arriving in Ottawa, he stated that he wanted to travel to the Middle East to study religion and applied for a renewal of his Libyan passport. But he was stymied by the Libyan embassy’s demand for a time-consuming background check. After the shooting, his mother, Susan Bibeau, wrote in a letter to Postmedia News that this refusal was a tipping point for her son, whom she considered mentally unbalanced.

“If I try to understand the motivations of my son, I believe that his passport was refused and that pushed him into action. He felt cornered, unable to stay in the life he was in, unable to move to the next one he wanted to go to.… He was mad and felt trapped so the only way out was death,” she wrote.

On 4 October 2014, the shooter took part in a guided public tour of the Centre Block on Parliament Hill — including the Library of Parliament, the House of Commons and the Senate. Two weeks later, he bought a used 1995 Toyota Corolla and obtained a .30-30-calibre Winchester hunting rifle. Police believe he took the rifle from the home of an aunt who lived near Ottawa.

On 22 October, the shooter made a video recording of himself, expressing his disapproval of Canada’s military action in Afghanistan and Iraq. At about 10 a.m., he parked the rusting Corolla on Wellington Street in downtown Ottawa, next to the National War Memorial. He ran with his rifle to the plaza surrounding the memorial.

Corporal Nathan Cirillo, a 24-year-old member of the Argyll and Sutherland Highlanders of Canada — a reserve infantry unit based in Hamilton, Ontario — was standing on ceremonial guard duty at the memorial with his friend and fellow reservist, Corporal Branden Stevenson. The shooter approached them from behind and fired a shot into Cpl. Cirillo’s back. Cirillo fell, and began crawling on his hands and knees, away from his attacker to the other side of the memorial. The shooter walked up and fired again into Cirillo’s back. The wounded soldier lay prone on his stomach beside the memorial. The shooter fired a third and final shot into Cirillo's back; he then raised his right hand, yelled into the air, and ran back to the parked Corolla.

After the shooting, several bystanders rushed to help Cirillo and give first aid. He was taken by ambulance to hospital but did not survive. He had joined the cadets at the age of 13, and was the father of a 5-year-old boy. Prime Minister Stephen Harper, speaking later at Cirillo’s funeral, said, “He has now joined the ranks of so many brave Canadians who have gone before him, having given all in the service of their country.” 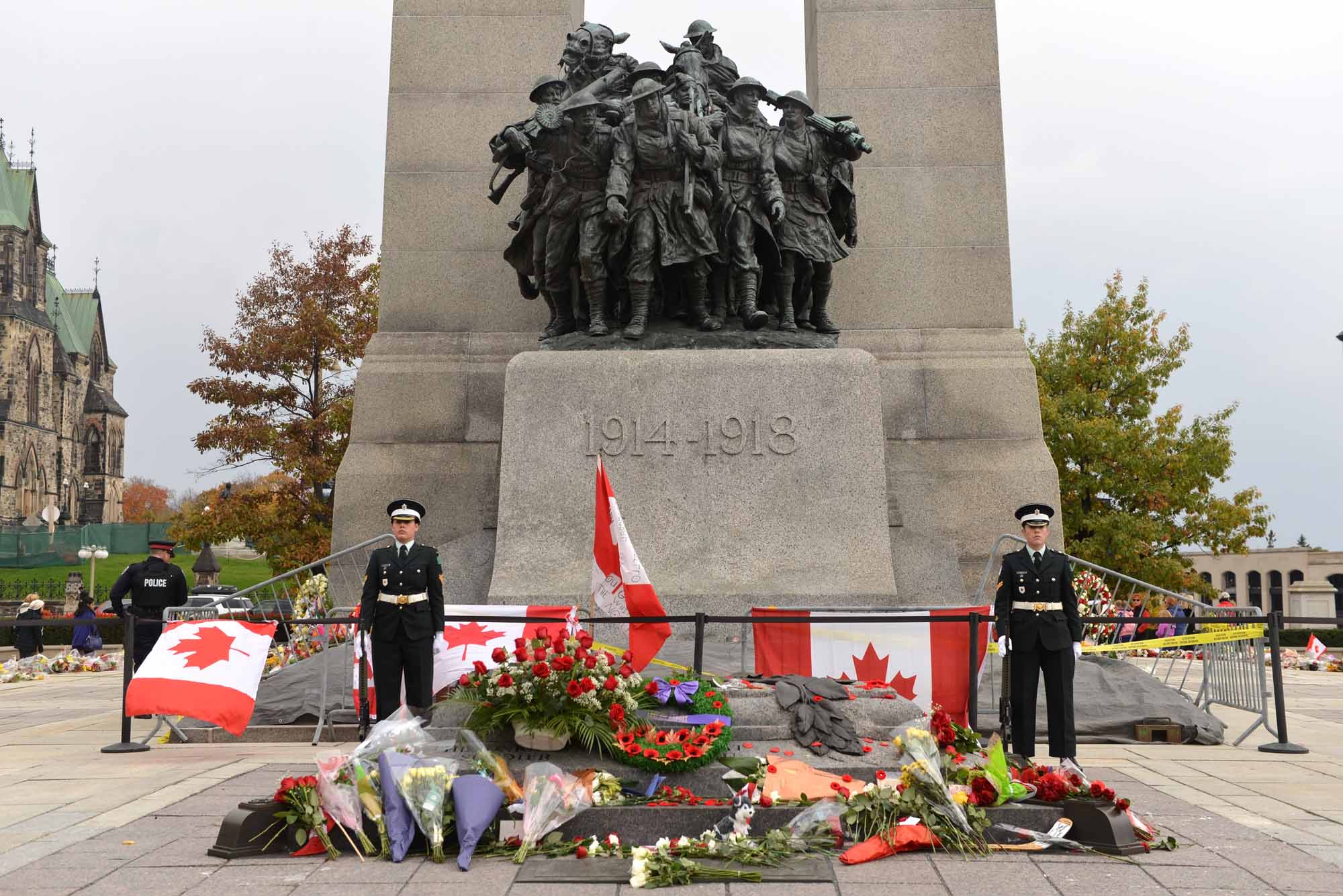 Ceremonial guards stand at attention while mourners pay respect at the Ottawa Cenotaph where guard Nathan Cirillo was shot 3 days before. An armed policeman, on the left, is also on site.
46065986 © Paul Mckinnon | Dreamstime.com

After shooting Cirillo, the killer drove his Corolla a short distance along Wellington Street. He stopped the car at one entrance to the curving driveway that sweeps around the front lawn of the Parliament Buildings. He ran up the driveway with his rifle and threatened to kill the driver of a parked black Chrysler limousine — a Cabinet minister’s car — if the driver didn’t get out of the vehicle.

At this time, a woman pushing a baby carriage along the driveway ran up to an RCMP officer sitting in her police cruiser and pleaded, “Let me in your car. Let me in your car. There is a man with a gun.” The Mountie then saw the shooter hijack the black Chrysler; she watched as he drove the limo at high speed straight toward her cruiser and on to the Peace Tower at the entrance to the Centre Block. The Mountie radioed other police on the Hill about a man with a gun in a black limo.

The shooter ran into the Peace Tower entrance, which leads to the Centre Block, where he was confronted by Constable Samearn Son, an unarmed House of Commons security guard. Son was shot in the leg as he and the shooter wrestled over the rifle. Injured and bleeding from his leg, Son stumbled outside onto the driveway, where he told the female Mountie, who had run to the Peace Tower from her cruiser, that he had been shot by a gunman who had entered the building (Son survived his injury).

After shooting Son, the killer pointed his rifle, point blank, at the chest of a second House of Commons Security Service guard manning the Peace Tower doors. Instead of firing, he lowered the gun and dashed up a set of stairs into the Hall of Honour, an expansive stone hallway that runs the width of the Centre Block. The shooter exchanged gunfire with three other guards, before charging down the Hall towards the Library of Parliament.

Meanwhile outside, police and emergency vehicles were swarming toward the scene. Bystanders looked on in shock or rushed for safety.

That morning was “caucus day” for the House of Commons — meaning the Centre Block was busy, with Members of Parliament (MPs) of the different parties meeting in large committee rooms on either side of the Hall of Honour. About 150 Conservative MPs and senators were meeting in the Reading Room with Prime Minister Stephen Harper. Directly across the corridor, about 80 New Democratic Party (NDP) members, including the leader of the Opposition, Thomas Mulcair, were meeting in the Railway Committee Room. Journalists and television news crews were outside the rooms, waiting to interview MPs.

When politicians learned that a gunman was inside the building, they barricaded the doors to their meeting rooms. Some Conservative members took ceremonial flagpoles and wielded them as spears, waiting beside the closed doors, ready to assault any intruder. Meanwhile, Harper was placed briefly in hiding — inside a closet in the Reading Room — before he was whisked away to safety by police.

The Shooter is Killed

Beyond the doors, shots rang out in the hall as guards and RCMP officers engaged in a gun battle with the shooter. There were cries of, “Gun, gun, gun,” and “Drop your weapon!” The Hall of Honour and the entrance to the Centre Block was filled with smoke and the smell of gunpowder. One RCMP officer had a bullet pass through his uniform pants without striking his leg.

Despite being injured by some of the dozens of shots fired at him by security officers, the shooter managed to reach the end of the Hall; he took cover behind a large stone pillar near the entrance to the Library of Parliament. From his hiding spot behind the pillar, the shooter fired a shot directly at a team of four RCMP officers converging on his position. The bullet whistled past the Mounties’ heads. Meanwhile, Kevin Vickers, the House of Commons sergeant-at-arms, had made his way with a handgun to the other side of the pillar where the shooter was hiding. Moments later, the shooter was killed in a hail of bullets fired almost simultaneously by Vickers and by Constable Curtis Barrett, one of the four Mounties moving on his position. By the end of the firefight, 56 bullets had been fired inside Centre Block by six police and security officers, in addition to the shots fired by the gunman.

Outside, police sirens sounded throughout downtown as members of the Ottawa Police Service and RCMP swarmed towards Parliament Hill. Parts of Centre Block were evacuated before the building was locked down. All of Parliament Hill and much of downtown Ottawa, including the Rideau Centre shopping mall, were also locked down. Tens of thousands of people were restricted inside buildings within the police security perimeter. Police worked through the day to determine whether the shooter was acting alone or had accomplices still at large. However, no other attackers were on the loose. By 8:30 p.m., all the lockdowns had been lifted and an anxious normalcy was restored.

Politicians gathered in the House of Commons the day after the attack, during an unusually emotional session in which partisan conflict was replaced with collegial solidarity. This included the extraordinary spectacle of Harper crossing the floor of the Commons to the opposition side, where he shook hands and embraced both NDP leader Thomas Mulcair and Liberal leader Justin Trudeau amid the applause of the chamber.

A national, public debate ensued about whether the killer was a radical Islamist terrorist or a mentally ill criminal. In his remarks to the Commons the day after, Harper quickly condemned the shooting as a “terrorist attack” and told Canadians that he was “resolved to fight” terrorism both at home and abroad. The RCMP also characterized the attack as terrorism, and Trudeau said that he accepted the RCMP’s description. However, Mulcair said that he would not use the word terrorism to characterize the attack, which was more likely rooted in the killer’s mental illness.

Official investigations into the attack, including an independent report by the Ontario Provincial Police released in June 2015, called security on Parliament Hill “highly inadequate” — describing a “lack of operational preparedness” in areas such as training, coordination between various police and security agencies, and poor resources. The report said the event was “a grim reminder that Canada is ill-prepared to prevent and respond to such attacks.”

The report’s release coincided with the creation of a new force, controlled by the RCMP, with full responsibility for parliamentary security.