Paul Hiebert, humorist, professor (b at Pilot Mound, Man 17 July 1892; d at Carman, Man 7 Sept 1987). After completing his education at the universities of Manitoba, Toronto and McGill, Hiebert taught chemistry for many years at U Man; but he won enduring national recognition and affection in 1947 with the publication of Sarah Binks, a book which has immortalized the fictional poetic exploits of Sarah - Hiebert's "Sweet Songstress of Saskatchewan" - for generations of Canadians. Hiebert extended the range of his warm but wryly hyperbolic commentary on Canadiana (and Binksiana) with Willows Revisited (1967) and For the Birds (1980), but his best-loved portrait, drawn with gentle mockery, remains that of the legendary Sarah. He was honoured both for his academic achievements (Governor General's Award for Science, 1924) and for Sarah Binks, which won him the Leacock Medal for Humour in 1947 and has been reprinted several times since. 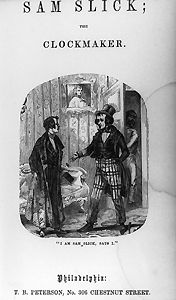