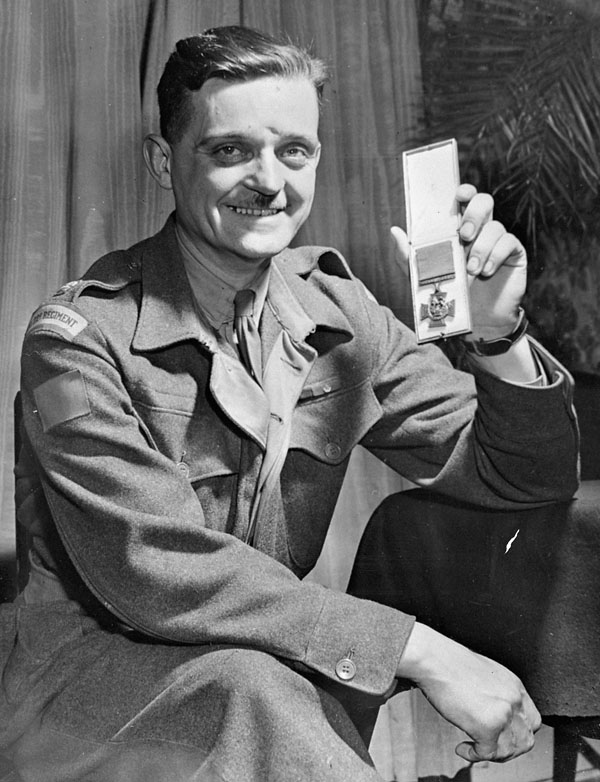 Paul Triquet was the fourth of 10 children in a family with a strong tradition of military service. At 11, he joined the army cadet corps that his father had founded. He left home when he was 14 and worked in sawmills and lumber camps. He tried to join the Royal 22e Régiment (the “Van Doos”) in Quebec City when he was 15 but was rejected for being underage. He returned two years later in 1927, claimed he was 19, and joined the army’s tiny Permanent Force as a private.

Paul Triquet found a new home in the army. He skipped recruit training and became a noncommissioned officer. After the Second World War broke out in September 1939, the Van Doos deployed to England in December as part of 1st Canadian Infantry Division. Triquet became the regimental sergeant major and, in March 1941, was commissioned as a lieutenant.

Triquet landed with his regiment in Sicily in July 1943. They reached the Italian mainland in September. Along the way, he was promoted to captain and then major in November (although he only became aware of his promotion to major in mid-December). The Van Doos fought their way up the Italian boot and by early December were approaching some of the hardest-fought battles to involve the 1st Division. (See Canada and the Italian Campaign.)

The Canadian advance toward the coastal city of Ortona was stopped short by German troops. The Germans were defending a five-kilometre-long, narrow, deep and steep-sided ravine known as “The Gully.” This formidable obstacle was a natural barrier to the forward movement of 1st Division, commanded by Major-General Chris Vokes. Repeated attacks against The Gully failed to dislodge the enemy.

While these attacks stalled, smaller-scale probing flank attacks indicated another possible approach: one from the west toward a sturdy farmhouse known as Casa Berardi, and then on to an important crossroads codenamed “Cider.” Vokes ordered the Van Doos to attack the farmhouse. Unknown to the Canadians, fresh German troops had arrived that night, leaving Casa Berardi defended by a strong force of infantry and tanks. (See Battle of Ortona.) 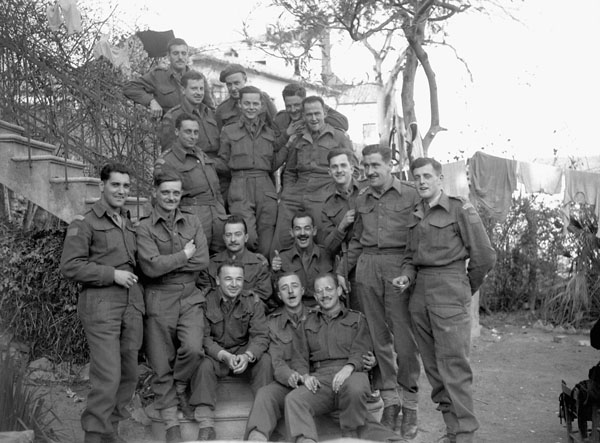 On 14 December, C and D Companies, with Sherman tanks of the Ontario Regiment in support, were ordered to cross the Gully and capture Casa Berardi. The attack got off to a bad start. Paul Triquet set off with C Company before the tanks made it through heavy mud, and D Company became disoriented in the confusing terrain. Seven Ontario tanks arrived shortly afterward, only to have one knocked out by a German tank.

With D Company missing, Triquet’s small group of 50 men and six Ontario tanks were on their own. As it approached Casa Berardi, it came under heavy machine-gun and mortar fire. At 1,500 metres from the farmhouse, C Company had been reduced to two 15-man platoons, supported by four remaining Shermans. Yet the tiny force continued to advance, encouraged by Triquet’s leadership.

By 2:00 p.m., with only 14 men left, the advance halted less than 200 metres from Casa Berardi. The Ontario Regiment’s tanks fired covering smoke as the Van Doos charged, reached the farmhouse’s stone walls and routed the remaining Germans. By 3:30, Triquet’s men had captured Casa Berardi. Outnumbered and outgunned, with ammunition and water running low, Triquet, a handful of men and four tanks held on throughout the night against repeated German counterattacks until reinforcements arrived the next day.

A famous phrase uttered by Triquet during this action entered the army lexicon. While moving forward with his company, he shouted, “There are enemy in front of us, behind us and on our flanks. There is only one safe place — that is on the objective.” For his “determined leadership and example” during the capture and subsequent gallant defence of Casa Berardi, Triquet received the Victoria Cross from King George VI at Buckingham Palace on 27 March 1944. 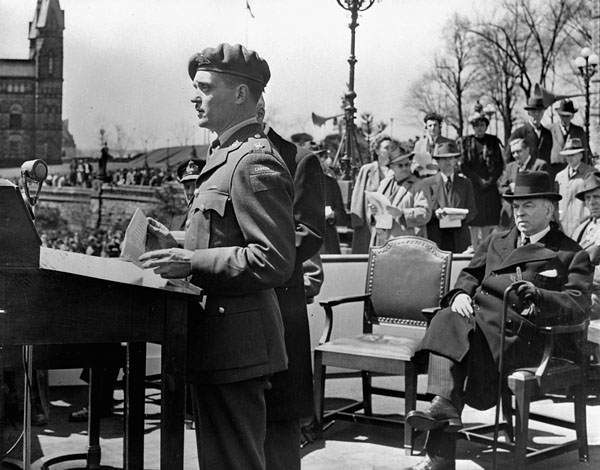 Army public relations staff were anxious to use Paul Triquet’s exploits to support the war effort. But Triquet was uncomfortable speaking to large audiences, especially in his marginal English. All he wanted to do was to return to his regiment and the war. After the war, such pressures led to heavy drinking by Triquet, now a lieutenant-colonel, which resulted in his forced retirement in 1947.

Triquet became a sales manager for a forest products firm and remained close to his army comrades. When the Korean War started in 1950, he volunteered for service but was turned down. By now, Triquet had overcome his drinking problem, joined the reserves and become commanding officer of Le Régiment de Lévis. He was later promoted to colonel and retired as a brigadier in 1960. Following several years of declining health, Triquet died in 1980. After a military funeral, his ashes were interred in the memorial chapel at the Citadel in Quebec City, the home of his beloved regiment.

The Valiants Memorial is a collection of nine busts and five statues in Ottawa’s Confederation Square depicting key figures from Canadian military history. One of the busts is of Paul Triquet. Another bust of Triquet is in the Citadel.

Memorial plaques honouring Triquet are placed in Quebec City, Montreal and Calgary, as well as another plaque and a memorial at Casa Berardi. Streets in Quebec City and Cabano, as well as a path in the Field of Honour Cemetery, Pointe-Claire, Quebec, bear his name. His name also appears on a VC Memorial in York Cemetery, Toronto.

An islet off the coast of British Columbia was named Triquet Island in his honour. Maison Paul-Triquet is a long-term care facility for veterans in Sainte-Foy, a suburb of Quebec City.