The job holds less significance to the mandarins in Ottawa. Tremblay and his fellow soldiers from the Royal 22nd Regiment in Valcartier, Que., wound up five months of operations at the end of last week and began preparing to return home.

This article was originally published in Maclean's Magazine on March 20, 2000

The job holds less significance to the mandarins in Ottawa. Tremblay and his fellow soldiers from the Royal 22nd Regiment in Valcartier, Que., wound up five months of operations at the end of last week and began preparing to return home.This article was originally published in Maclean's Magazine on March 20, 2000 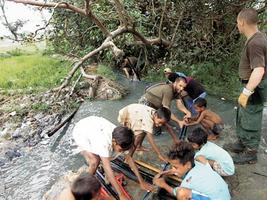 The brilliant green of new shoots in the rice paddies provides a sharp contrast to the dirty grey of the runoff from late-season rains in the Mota Mola River, trailing lazily through East Timor's fertile southern coastal plain. Under the spreading limbs of a banyan tree, the women and girls of Zumalai village fetch water from a shallow spring. Full jugs perched on heads, they pick their way along the narrow tops of muddy dikes separating the rice fields for the few kilometres back to their homes. Last week, they stopped to watch as a Canadian soldier, Sgt. Yvan Tremblay, struggled to make their daily chores a little lighter. Assisted by a few fellow soldiers and a noisy, enthusiastic crew of local kids, Tremblay, one of 281 Canadian military posted in East Timor, was in muddy water up to his thighs, installing a pipe leading directly to Zumalai. "It's very important for the village," said a Timorese helper, Marcelino Munis. "It's very far to the spring and it's a very difficult path."

The job holds less significance to the mandarins in Ottawa. Tremblay and his fellow soldiers from the Royal 22nd Regiment in Valcartier, Que., wound up five months of operations at the end of last week and began preparing to return home. They are the remainder of what - at its peak of 650 members - was Canada's biggest peacekeeping mission in Asia since Korea in the early '50s. As Canada streamlines peacekeeping operations around the world, the Van Doos will not be replaced in East Timor. For Canada's hard-pressed military, "the commitment of ground troops was not sustainable," says Capt. Roger Girouard, the naval officer who commanded the $32.5-million mission, code-named Operation Toucan.

With the soldiers' imminent departure, the only official Canadian presence in East Timor as it prepares for independence under UN administration will be a squad of 14 police officers from the RCMP and municipal forces, and there are rumours they, too, could be on the way home. Ottawa has not yet revealed how much money will be available in the fiscal year starting next month for East Timor aid projects managed by the Canadian International Development Agency. Canada's ambassador to Indonesia, Ken Sunquist, says Canada is not abandoning Timor, which has freed itself from a bloody 25-year Indonesian occupation that ended last year with a two-month rampage of looting and burning by the departing Indonesian military. "There is no implication that we are running away," he told Maclean's.

Others are less sure. UN administrator Sergio Veira de Mello told Maclean's he was "disappointed" that Canada has declined an invitation to maintain a peacekeeping presence. And one of the new territory's leaders, Nobel Peace Prize winner Jose Ramos-Horta, who has returned from 24 years in exile, says he thinks Ottawa's tepid response to Timor's needs is at odds with Canadian public sentiment. "Canada is almost totally absent," says Ramos-Horta, who plans to visit Ottawa this spring.

Since the Canadian military's arrival in October as part of a UN-sponsored peacekeeping force, its presence has been very much in evidence. The soldiers' first task was to end the violence and establish security in the territory. Unlike similar missions in other nations where peace remains an elusive goal, "that mission has been accomplished," says Maj. Alain Gauthier, commander of the infantry company based in Zumalai. It was responsible for an area of coastal plains and mountains in southwestern Timor that the United Nations dubbed Sector Gretzky.

Aside from responding to periodic flashes of violence, the soldiers were able to turn much of their attention in recent months to rebuilding a poor and shattered land. Marauding troops destroyed about 80 per cent of the territory's buildings and caused most of the population of 880,000 to flee their homes. Canadian Forces padre Swavek Gorniak says many of the troops gave up days off to pitch in with the rebuilding. "They see a great need here," he says, "and they want to contribute."

Life in East Timor is beginning to resume its normal rhythms, nowhere more so than in rural areas like Sector Gretzky. Last week, Sgt. Claude Dubé led four soldiers armed with C-7 assault rifles on one of the last of their patrols through the Canadian sector. Driving fat-wheeled all-terrain vehicles, the troops headed east to a nearby village. There, the headman, Mateus Arauze, explained that only about 100 of the 700 former residents have come back from refuge in West Timor, where intimidation by Indonesian-backed militias is hindering the return of refugees. Aid organizations have been unable to distribute enough rice. Crops were burned and animals killed or shipped to Indonesia, Arauze said, but under the security blanket of the Canadian troops, people have been preparing for the first harvest in an independent East Timor. The militias destroyed many things, he said, but "they didn't burn the land."

The patrol continued past a burned-out sugar-processing plant and tiny towns with roofs a colourful patchwork of tarpaulins branded with the names of various aid agencies. Children rode rusty bicycles along the road, past fields where their parents tended the rice crop, oblivious to the tropical heat and intermittent rain. In the small town of Cassa, a wedding in the newly repaired Santo Yoseph Roman Catholic Church attracted a crowd of well-wishers.

Dubé, a veteran of 14 years in the army, including a peacekeeping tour in Haiti, is proud of the Canadian soldiers' accomplishments in Timor. "These people needed help," he said. "If I could help, I am happy with that." But, like everyone else on the mission, he is happy to be going home. Dubé's five-month absence has not been easy for his wife, Sandra, and children Stefanie, 7, and Julia, 5. A particular gripe among the soldiers: a 10-minute limit on their weekly phone calls home, not enough time to help sort out family problems.

The Canadian help came in many forms. With a $10,000 grant from the Canadian Embassy in Jakarta, the soldiers rebuilt a school and hospital in Zumalai, created a soccer field with possibly the only netted goals in all of East Timor, built a playground, cut down large trees for use as dugout canoes and gave new life to an old tractor long given up for dead. While some projects involved the concerted efforts of several soldiers over a period of weeks, others were simple acts of kindness. Pastino Manis, age 10, lay bravely on a stretcher supported by sawhorses in the Zumalai medical post while Warrant Officer Duncan Marvin and his staff dressed an infected wound the boy suffered when gored by a water buffalo. Pastino went home with a strawberry milkshake and instructions to take his antibiotics.

In the final days, a spate of attacks on local residents by militias from West Timor has made the main job of keeping the peace in East Timor more difficult. The United Nations considers the continuing attacks more a dangerous nuisance than a real threat to peace, now secured by some 9,000 troops from more than 20 nations. "They will not destabilize us here," says the United Nations' Veira de Mello. In the view of some observers, a bigger risk to stability comes from within East Timor, where 80 per cent of the people have no means of support, the economy is dormant and thousands of foreign experts receiving expatriate wages mix daily with people who have nothing. The crime rate is on the rise and the main population centres of Dili and Baucau have experienced gang violence.

Some accuse the UN administration readying East Timor for independence of being too slow to get large-scale reconstruction under way. "The rise of street gangs in urban areas as well as labour unrest in Dili indicates that the honeymoon is over," says a Canadian Forces document. The assessment of one Canadian observer is more blunt: "The place is going to hell in a handbasket." But Veira de Mello dismisses the criticism, saying he is working as fast as he can to inject some money into the economy, noting he has only been on the job a few months. Yet, he adds, "I can understand the frustrations of the Timorese." The United Nations has established a judicial system, it is recruiting a civil service and, with the help of RCMP Cpl. Daryll Davies of Newmarket, Ont., is setting up a police college for Timorese recruits.

Ramos-Horta thinks some critics exaggerate the problems. With development funds starting to flow, he says, "six months from now it will be different." One reason for optimism: a $2.1-billion natural gas project in the Timor Gap off the south coast is to go into production by late 2003. As they head home, the Canadian troops can take comfort in knowing they have helped give the people of East Timor a taste of peace and the beginnings of a free, stable society. Whatever the scope of Canada's future aid, that is a proud legacy.

The first Canadian peacekeepers went abroad in 1947 to Korea. Currently, nearly 3,500 serve with the United Nations in more than 11 countries:

AMERICAS: Five with a UN police mission in Haiti (1994), and one on a peace-verification mission in Guatemala (1997)