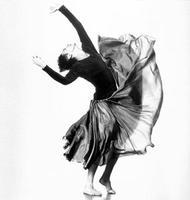 Peggy Laurayne Baker, née Smith, dancer, choreographer and teacher (born at Edmonton, Alberta 22 Oct 1952). Baker is acknowledged internationally as one of the finest modern dancers Canada has ever produced. Before beginning the acting program at the University of Alberta, Baker was introduced to modern dance by Patricia Beatty, a cofounder of Toronto Dance Theatre. In 1971 she moved to study at the School of Toronto Dance Theatre and appeared with the company as an apprentice. She became a founding member and occasional contributing choreographer of Dancemakers in 1974 and, with a break to study in New York (1976-77), remained until 1980 as artistic director.

Peggy Baker danced with the Lar Lubovitch Dance Company in New York (1981-88) and became one of its most acclaimed performers, latterly assisting Lubovitch as rehearsal director. In 1990 Baker toured across the United States with Mikhail Baryshnikov's White Oak Dance Project and launched a new career as a solo dancer/choreographer. She has since performed to critical acclaim across Canada and in New York.

Her tall, lean, statuesque physique and broad interpretive range make her a charismatic stage presence. Baker is acclaimed for her technical and expressive abilities. She can move with lyrical elegance yet equally exploit the natural linear quality of her body to generate deliberately distorted, angular imagery. In her solo programs Baker mixes her own choreography with work by such choreographers as James Kudelka, Paul-André Fortier, Mark Morris and Molissa Fenley. Her preference is for metaphoric works which, while not specifically narrative, are profoundly humane. Baker's emotional range embraces everything from elegiac reverie to madcap humour.

As a teacher Baker is in demand across Canada and the United States. In 1993 she was appointed the National Ballet School of Canada's first artist-in-residence, teaching, choreographing and staging Lubovitch works for the students. In 2006 she was named a member of the Order of Canada and in 2007 Peggy Baker became the first person to receive the Ontario Premier's Award for Excellence in the Arts. In 2010 the Canada Council for the Arts presented Peggy Baker with the Walter Carsen Prize.