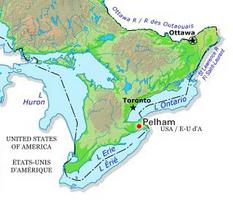 Pelham, Ont, incorporated as a town in 1970, population 16 598 (2011c), 16 155 (2006c). The Town of Pelham is in the Regional Municipality of Niagara, located between the NIAGARA ESCARPMENT and the Welland River. The communities within Pelham are Fonthill, Fenwick, Ridgeville, Effingham and North Pelham. The municipal offices are in Fonthill. The town was named in honour of a British nobleman Henry F. Pelham Clinton.

The rural-agricultural environment includes the Short Hills, vineyards, orchards and Canada's oldest sugar maple tree. There are sand quarries on the Fonthill Kame. Settled in the mid-1780s by United Empire LOYALISTS, including QUAKERS and members of Butler's Rangers, in the 1820s a site at the highest point of the NIAGARA PENINSULA was proposed for a major fortress. Pioneer industrial centres developed at St Johns and Effingham in the Short Hills, and today a heritage walk of the former sites adds to local tourism. Fonthill, with extensive former nurseries, underwent considerable and continuing residential expansion after World War II with middle and upper-income workers now commuting to WELLAND, NIAGARA FALLS and ST CATHARINES. A controversial large expansion to the east of Fonthill and continued highway commercial sprawl not only result in lost unique agricultural land but threaten the village atmosphere of the community.