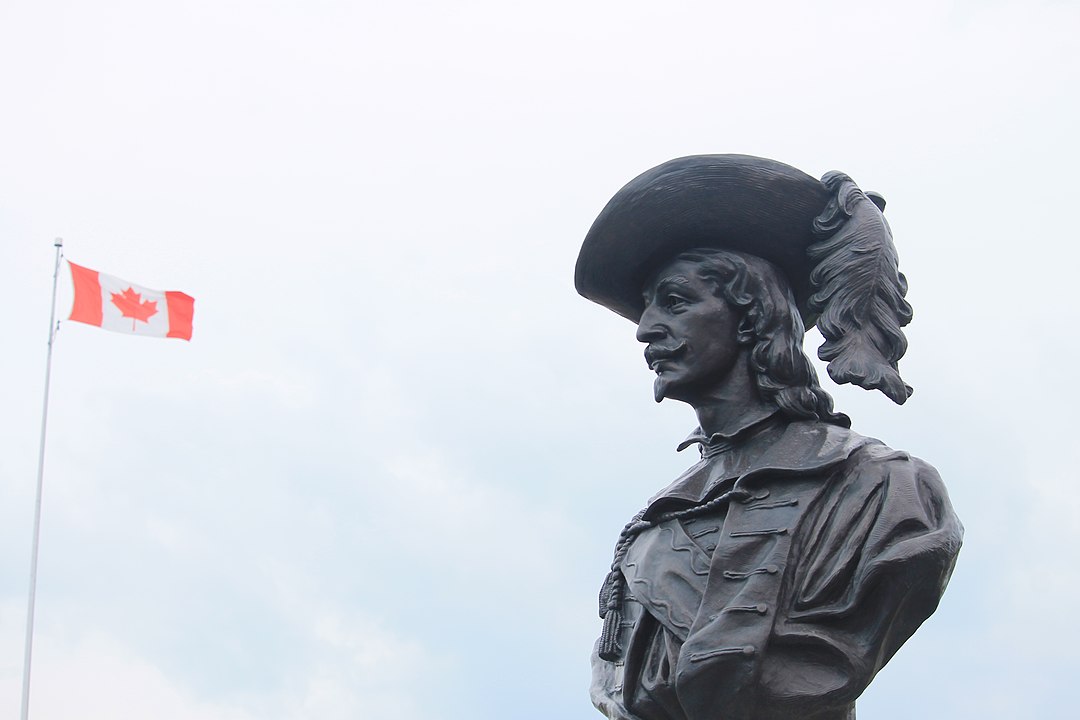 A bust in tribute to Pierre Dugua de Mons in Quebec City, Quebec.

Pierre Dugua de Mons was likely born in the town of Royan on the west coast of France. Royan is relatively close to the village of Brouage, the birthplace of his more famous employee, Samuel de Champlain.

De Mons was born into the turmoil of France’s Reformation and Counter-Reformation. During the Reformation, some Europeans chose to break away from the Catholic Church and become Protestants. The Counter-Reformation was a reaction to this movement, as many fought to preserve the Catholic Church’s power. In the late 1500s, France fought the Wars of Religion, a series of conflicts between Catholics and Protestants. During these wars, de Mons fought alongside King Henri IV’s royal forces. Like the King before his conversion to Catholicism in 1593, de Mons was a Protestant (also known as Huguenot). For his commitment to the Crown during the conflict, de Mons received a large pension, governorship of the town of Pons and royal patronage. Upon the King’s assassination in 1610, de Mons was banished from the royal court by Henri’s widow, Queen Marie de Medici. Champlain, however, continued to represent de Mons’s interests at court.

Much like King Henri IV, who converted from Protestantism to Catholicism to maintain the crown, de Mons married a Catholic (Judith Chesnel). When de Mons travelled to North America he went with both Protestants and Catholics.


Pierre Dugua de Mons likely traveled to North America during the late 1500s. He rose to prominence in 1603, however, when King Henri IV granted him a trading monopoly in Acadia. Acadia was a French colony that included parts of what would become Quebec, the Maritime provinces, and Maine. It was common at the time for the state to grant merchants exclusive rights to trade in order to reduce its expenses and exposure to risk. Under his commission, de Mons’s monopoly included all of the North American coastline between present-day Philadelphia and Cape Breton. In addition to trade, de Mons was to “people, cultivate, and settle the said lands as promptly, carefully, and wisely as time, place and circumstances will permit.” Under this commission he founded the Compagnie de Rouen, also known as the Compagnie de Mons.

Before de Mons received this grant, the French were focused on building relationships with the Innu at the fishing station at Tadoussac. De Mons, however, found the climate along the St. Lawrence River too harsh. He cast his eyes further south to Wabanaki and Mi’kmaw homelands, which were increasingly being claimed by the English. The formative years of his monopoly (1604–1607) focused on the area around the Bay of Fundy, specifically the St. Croix River, Saint John River, and Annapolis Basin.


Pierre Dugua de Mons’s first settlement was on Muttoneguis Island in the St. Croix River, which divides what is now Maine and New Brunswick. De Mons renamed the island St. Croix. Over the summer of 1604, he built the settlement with his associates François Gravé Du Pont and Jean de Biencourt de Poutrincourt. It was an unquestionable failure. Because the settlement was on an island, the colonists had limited access to mainland resources. That winter, 35 of de Mons’s 79 employees died of scurvy. In addition, de Mons brought along two Catholic priests and a Protestant minister. They argued constantly, causing extensive religious conflict.


Following the failure at St. Croix Island, Pierre Dugua de Mons returned to France to shore up his business interests, while his North American employees and co-adventurers moved his small settlement across the Bay of Fundy to the Mi’kmaw community at Tewopsik (later known as Port Royal). He had granted this place — seemingly without interacting with Mi’kmaw authorities or their legal traditions — to his associate Jean de Biencourt de Poutrincourt a year earlier.

Though not very profitable, de Mons’s efforts at Port Royal were much more successful than they had been at St. Croix Island. Mi’kmaw Grand Chief Membertou tolerated, and perhaps even welcomed, the French delegation. French lawyer Marc Lescarbot, a friend of Poutrincourt’s who visited the outpost over the winter of 1606–07, staged the Théâtre de Neptune that year. Théâtre de Neptune is the earliest example of European theatre in North America. More collectively, the men at Port Royal created a social club known as the Ordre de Bon Temps to pass the time in better spirits. Importantly, Mi’kmaw male leaders periodically joined them in their endeavours.


By 1609, Pierre Dugua de Mons’s role in North America had diminished. Two years earlier, after significant pressure by competing merchants, King Henri IV had revoked de Mons’s trade monopoly. In addition to financial losses incurred at Port Royal, the loss of his monopoly directed his attention back to the St. Lawrence River. In 1608, he ordered his employee Samuel de Champlain to build a new outpost at what would become Quebec City. De Mons’s associate, Jean de Biencourt de Poutrincourt, continued at Port Royal until 1613.

In 1610, King Henri IV was assassinated. By that time, Champlain, acting as de Mons’s lieutenant, had established a French presence at Quebec City. With only a handful of exceptions, the French settlement at Port Royal suffered, entering over a century of conflict and neglect. At Quebec City, however, de Mons continued his involvement in the North American trade until at least 1617.

In the early 1600s, in an effort to extend trade, France sought to make alliances with Indigenous peoples and to bring peace between warring nations. It is difficult to know how successful Pierre Dugua de Mons was in achieving these goals as he wrote little about his travels. Historians rely on accounts written by de Mons’s employee, Samuel de Champlain, and French lawyer Marc Lescarbot in order to learn about his life, especially as it relates to his relationships with Indigenous peoples. For example, on a trip to what is today the state of Maine, Champlain explained: “the Sieur de Monts had sent me to them to see them, and also their country; that he wished to remain friends with them, and reconcile them with their enemies, the Souriquois and Canadians; moreover, that he desired to settle in their country and show them how to cultivate it…”

In addition, Lescarbot claims de Mons and his associates treated First Peoples with humanity and were well regarded and respected. However, it’s often not clear the degree to which Indigenous and European diplomats could communicate with each other.

Nonetheless, in 1603 at Tadoussac, the French entered into an alliance with the Innu and their allies, their first such arrangement with an Indigenous people. When de Mons received his trade monopoly later that year, the relationship with the Innu was strengthened. Unlike earlier encounters, where delegates or trade goods were exchanged or hostages taken, de Mons also promised military assistance. Lescarbot considers de Mons as an important figure in establishing Tadoussac as a centre for trade.

Though there is no clear indication that similar diplomatic efforts occurred at St. Croix Island or Port Royal, de Mons never worked in the region without Indigenous guides. His travels along the Atlantic Coast were facilitated by Etchemin leaders Chkoudun and Oagimont. Though the record leaves the Etchemin delegation anonymous, both Chkoudun and Oagimont may have attended the 1603 council at Tadoussac as allies of the Innu.

The degree to which these relationships were developed directly by de Mons or his subordinates, such as Champlain, remains unclear. It is important to note, however, that both the Etchemin and Mi’kmaq were allies with the Innu, and that diplomacy between these groups and the French followed Indigenous protocols as opposed to European ones.

Much like further west during the later French period, French diplomacy was always limited to the networks of their allies. Though they often tried to extend beyond these relationships, de Mons and his associates failed to build bridges with the enemies of the Etchemin, Mi’kmaw, and Innu.

Pierre Dugua de Mons is responsible for establishing France’s first two long-standing settlements in North America: Port Royal and Quebec City. He is also responsible for employing important historical figures like Samuel de Champlain and Mathieu Da Costa. Champlain cultivated alliances with key North American trading partners, and Da Costa is widely considered to be the first African involved in the colonization of Canada. He served as de Mons’s interpreter between 1608 and 1609.

Despite de Mons’s importance, his legacy has been overshadowed by Champlain. Because de Mons wrote little of his travels, historians rely on Voyages, by Champlain, and The History of New France, by Marc Lescarbot, in order to interpret the period. In addition, in the 1632 publication of his voyages, just four years after de Mons’s death, Champlain replaces de Mons with himself. In earlier editions of Champlain’s writings de Mons had been a central player.

Perhaps de Mons’s most lasting legacy is in the names he chose to replace those used by the Mi’kmaq and Wabanaki. In addition to renaming Muttoneguis Island, St. Croix, de Mons and his employees are also responsible for renaming the Wolastoq River, Saint John, and Tewopsik, Port Royal.

By the mid-1620s, Pierre Dugua de Mons had mostly withdrawn from the North American trade. He died on 22 February 1628 near his home at the Chateau d’Ardennes near Fléac-sur-Seugne, France. He had no children.