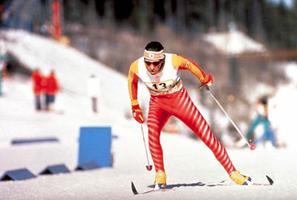 Pierre Harvey, cross-country skier (b at Rimouski, Qué 24 Mar 1957). An exceptionally versatile athlete, he began serious competition at age 12 as a swimmer, switching to cycling at 16. On his way to a Québec championship (1975), a Canadian championship (150 km, 1976) and Canada's best 1976 Olympic cycling performance (24th, 180 km), he took up cross-country skiing as winter training.

In 1984 he became the first Canadian male athlete to participate in both Olympics (Summer and Winter, in cycling and cross-country skiing) in the same year, but he had already begun the concentration on cross-country skiing which was to make him one of the sport's all-time greatest Canadian champions. His impressive string of achievements includes first winner of all 4 gold medals at one Canadian championship (1986 and again in 1987), first Canadian winner of a World Cup Race (Falun, Sweden, 1987, 30 km free technique), and first Canadian Worldloppet winner (Birkebeiner, Norway, 1987).