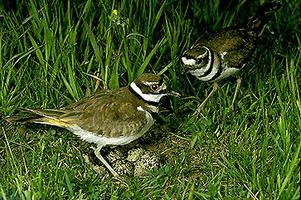 The killdeer is the largest of the ringed plovers (Corel Professional Photos). 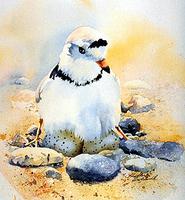 The endangered piping plover can be found on sandy beaches in southern Canada east of the Rockies (artwork by Heather Caldwell).
PreviousNext

Plover is the common name for a family (Charadriidae) of shorebirds with 2 subfamilies: Charadriinae, including true plovers; and Vanellinae, including lapwings.

Plovers have plump bodies, short necks and short bills, which are expanded near the tip. Although none are brightly coloured, many have strongly marked plumage patterns of black, white and brown that are conspicuous in flight. Because invertebrate prey are located visually, plovers have relatively large eyes and good eyesight.

True plovers are characterized by tapering wings. Many species have one or more breast bands (ringed); most have melodious calls. Lapwings are much larger than true plovers and are recognizable by their broad, rounded wings. Some have feather crests or wattles of skin on the face and spurs on the wings, features that are important in courtship displays and territory defence.

Most plovers are gregarious outside the breeding season, gathering in flocks of several hundreds to thousands. They fly strongly and migrate from coastal, winter feeding areas on bays and estuaries, north to breeding sites in remote arctic regions.

Nests are a shallow scrape in the ground with little or no lining. Usually 4 eggs are laid (range 2-4). Chicks are down-covered on hatching and leave the nest soon after they are dry. Normally, parents share incubation (21-30 days) and guarding of chicks. All plovers use elaborate distraction displays, such as the "broken wing" display, to lure predators away from eggs or young.