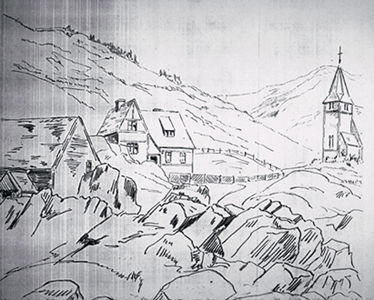 Portugal Cove, Newfoundland the Parsonage and Church by William Grey. This is a sketch of his house and his parish church and both were designed by him (courtesy Royal Institute of British Architects).

Portugal Cove, which appears on maps by 1630, was probably named for the Portuguese fishermen who occupied the cove seasonally in the 1600s while the English and French dominated St John's and other major fishing sites on the Avalon Peninsula.

Originally settled by fishermen from Devon and Jersey, Portugal Cove was one of the English settlements captured by Pierre Le Moyne d' IBERVILLE on his 1696-97 expedition during the Anglo-French struggles for control of Newfoundland. Portugal Cove at that time numbered 3 inhabitants; but the population grew to 651 by 1857 and 1026 by 1911.

Portugal Cove, which was connected to St John's in 1811 by one of the earliest major roads in Newfoundland, became a provincial transportation route to nearby BELL ISLAND after iron ore mining began there in the 1890s. In their heyday these mines provided a major source of employment for Portugal Cove residents, most of whom now commute to St John's to work. Portugal Cove-St Philip's continues to be the ferry terminus to Bell Island and retains its rural character with a poultry co-op, dairy farm and fish plant.