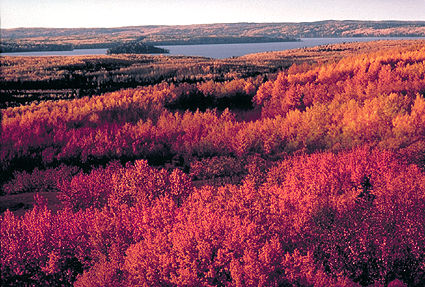 Prince Albert National Park (est 1927, 3874.3 km2) is located 200 km north of Saskatoon. The cabin and grave of Grey Owl (Archibald Belaney) are located in the park beside Ajawaan Lake, where he spent the last 7 years of his life.

Natural Heritage
Bounded to the south by farmland, the park lies on a transition zone between 2 ecoregions. Pockets of aspen parkland and fescue prairie in the south of the park blend with mixed-wood and boreal forests in the park's northern reaches. A network of lakes and rivers makes this a popular park for canoeists. Eskers, drumlins, glacial lakes, moraines, meltwater channels and other glacial features mark the land.

The park is rich in wildlife. Elk, moose and deer browse in the trembling aspen forests; wolves and a small number of woodland caribou roam the forests of jack pine, larch and balsam fir; pocket gopher and a small herd of free-roaming bison inhabit the sedge meadows and fescue grasslands. Park waterways harbour beaver, the animal most closely associated with Grey Owl. Over 230 bird species have been recorded; white pelicans and double-crested cormorants nest in the park. The white pelicans nest on an island on Lavallée Lake in the northwestern corner of the park. Since this is the second-largest nesting colony of this sensitive bird in Canada, the lake has restricted access.

Facilities
Commercial facilities and accommodation are available in nearby Waskesiu, Sask. Six vehicle-accessible campsites are located in the park, as well as primitive backcountry sites.