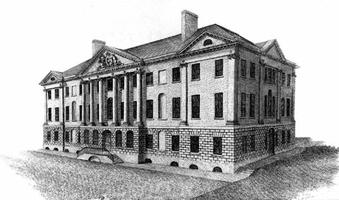 Built between 1811 and 1818, Province House in Halifax is a sophisticated example of the influence of the Palladian style (engraving by Charles Torbetts, 1846, courtesy Library and Archives Canada/C-108970).

Province House, Halifax, built between 1811 and 1818 to house Parliament, the courts and the public service of Nova Scotia, is a sophisticated example of the influence of the Palladian style on Canadian architecture. Each floor of the building is clearly set off, and the central vertical part of the main facade is emphasized by 6 Ionic columns supporting a large triangular pediment decorated with coats of arms. In the lateral sections, 2 pilasters also support small pediments. The placement of the decorative elements, the openings, the pilasters and the columns show a rare attention to harmony and symmetry. Tradition has it that John Merrick designed the building, but the name of Richard Scott is also frequently mentioned. Province House is the most noteworthy example of Palladian architecture in Canada.