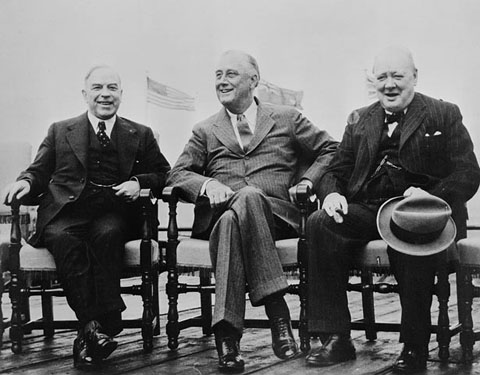 The Québec conferences were two in a series of high-level strategic meetings held by Allied leaders during World War II. The first took place from 10 to 24 August 1943, and the second from 11 to 16 September 1944. The meetings, at which the future course of the war was planned, were dominated by Winston Churchill and Franklin Delano Roosevelt, except at Yalta, where Josef Stalin was an equal partner. While some Canadian diplomats, such as Hume WRONG and Norman ROBERTSON, argued that Canada should have a place at these meetings, Mackenzie KING took no part in any of the sessions, even at Québec. Churchill felt that he represented the Dominions and considered it his responsibility to keep them informed. Even his suggestion that King take part in plenary sessions at Québec was vetoed immediately by Roosevelt, on the principle that if Canada were allowed to participate, then China, Brazil and the other Dominions would soon demand the same.

King himself was most comfortable playing host to the conferences in Québec, and he was amply photographed and filmed with Churchill and Roosevelt. While Canada had no share in the strategic direction of the war and King made only half-hearted attempts to gain one, this was not a reflection on the enormous contribution that Canada made to the war effort. Rather it reflected the difficult problem of waging war with a coalition of countries of different scales of power. King himself believed that he played a more important role as an intermediary between Churchill and Roosevelt, who often distrusted each other, than he would as a minor player in strategic planning.

In 1998 the debate over King's - and Canada's - role in the conferences erupted again with the unveiling of a statue commemorating the conferences in Québec City. The Québec government under Lucien Bouchard justified the omission of King from the statue by arguing that he played no role in the meetings. Thus King was denied by his own countrymen at least the role of host that even Churchill and Roosevelt had afforded him.