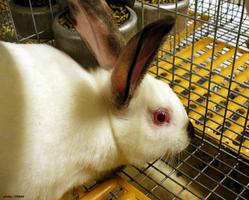 Rabbit farming, officially called cuniculture (from the species name for wild rabbits, Oryctolagus cuniculus), is a small part of Canadian agriculture, with most production in Ontario and Québec. Most rabbits are raised for meat, although there are specialized markets for laboratory animals and angora fibre. Rabbits convert feed to meat very efficiently — producing more meat per unit of feed than cattle, pigs or sheep, but less than fish or modern chickens. Rabbits can increase their numbers very rapidly when conditions suit them — healthy does produce seven or more young, called kits, 31–33 days after breeding and can rebreed almost immediately. But kits are born blind, deaf and without fur, and not all survive to marketable weight. Maintaining animal health and marketing are keys to a successful enterprise. 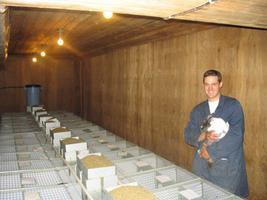 Rabbits are delicate creatures that need comfortable housing, good feed and careful handling. If they fall ill they often die or must be euthanized to prevent suffering or the spread of disease to other animals. Cleanliness and good ventilation help keep rabbits healthy. Rabbits breed year-round under controlled lighting lasting 12–16 hours per day.

Well-ventilated barns are important — rabbits can’t tolerate extreme temperatures and are susceptible to respiratory problems from dust and from ammonia, which emits from manure. Where wild rabbits are common, farm rabbits can contract disease from the wild animals. One of the main duties of the rabbit keeper is to check for animals showing signs of illness and move them out of the main barn. Manure must be removed regularly to prevent a buildup of ammonia and to control flies. Composted rabbit manure is very popular with gardeners.

Breeding does and bucks are usually housed in individual metal cages with mesh floors to allow urine and manure to fall through. Young rabbits stay in a nest box until they are about 10 days of age, and share their mother’s cage until weaning at about four weeks. The young remain in a group as growers until they reach shipping weight at 8 to 10 weeks. Mixing adult rabbits results in aggression and injuries.

Feed makes up about 60 per cent of the cost of raising rabbits. Most rabbit farmers use pelleted commercial feed that includes hay for the high-fibre diet rabbits need. Although the pellets provide all the necessary nutrients, some farmers provide hay to maintain digestive health, but mostly to satisfy the animals’ instinct to chew — so they are more content and less prone to stress.

Handling and stroking rabbits early in their lives enables them to relax around people when picked up or moved. It also limits harm to the person — rabbits can deliver a nasty kick, scratch or bite. Strangers in the barn are not usually welcome because the rabbits become stressed and visitors may introduce disease.

The National Farm Animal Care Council (NFACC) is working with provincial rabbit groups, researchers and the Canadian Federation of Humane Societies to develop a Code of Practice for rabbits — guidelines that already exist for the care and handling of other farm animals. A producer can use the code to verify that their system of working with animals is adequate for the health and well-being of the animals and that other producers are meeting the standards.

Few Canadians eat rabbit; in 2013, average consumption was less than 25 g per person a year. Around the world rabbit consumption is highest in Italy, Spain and France, but even in these countries it tends to be a regional dish. In the US, some small-scale rabbit producers butcher their own animals and sell meat directly to consumers so they can match production to their market. In most provinces, provincial food safety regulations forbid the sale or giving of meat that has not been inspected at slaughter (i.e., at a registered facility), making it challenging for a farmer to build a local market. Federally inspected plants in Québec and Ontario export rabbit meat to other provinces and the US.

Few North Americans have tasted rabbit even though it is a high-protein, low-calorie meat with very little fat, a little like chicken but with a slightly gamy flavour and “more meat per bone” than other meats. Rabbits’ feed efficiency makes the meat more sustainable than other meats. Chefs like the versatility of rabbit; it adds richness to slow-cooked dishes of many cuisines but can be roasted or grilled. Positive reviews of such dishes are common.

Rabbits originated in Spain. The Romans fenced them into enclosures and used them for meat and fur; this practice spread across Europe and escapees founded wild rabbit populations. Probably around 600 CE, monks kept rabbits in hutches or cages as easily accessible meat and this became a common practice that country people brought to cities during the industrial revolution.

Europeans brought wild rabbits to North America — rabbits are not related to hares or jackrabbits — but rabbit farming didn’t begin until about 1900. Raising rabbits for food was encouraged during the World Wars to supplement other scarce meat, but since then rabbit farming has declined. 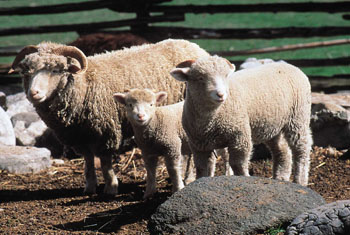