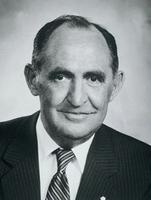 Raymond Urgel Lemieux, CC, FRSC, FRS, professor of chemistry (born 16 June 1920 in Lac La Biche, AB; died 22 July 2000 in Edmonton, AB). Internationally recognized for his fundamental and innovative contributions to organic chemistry, especially in the area of carbohydrates, Lemieux obtained his doctorate from McGill (1946). He briefly held research positions at Ohio State University and the University of Saskatchewan before moving, in 1949, to National Research Council Prairie Regional Laboratory in Saskatoon as senior research officer. Here he completed the first chemical synthesis of sucrose.

He moved to the University of Ottawa in 1954, where he pioneered the application of nuclear magnetic resonance spectroscopy to the structure elucidation of natural products. In 1961 he went to the University of Alberta, where his research focused on the special bonding properties termed "anomeric effects" and how these controlled the chemical reactions and shapes of carbohydrate molecules. This work led to the first chemical syntheses of the complex carbohydrates found on human cell surfaces and to an understanding of how the shapes of these molecules control their function.

In addition to producing more than 200 scientific publications, Lemieux held over 30 patents, mostly on antibiotics and semisynthetic blood group antigens, and was the founder of three research and chemical companies.