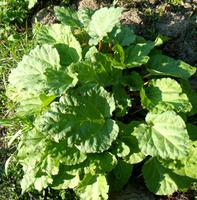 Rhubarb is commonly grown across Canada. It is mainly cultivated for its stalks, which are either eaten fresh (dipped in sugar) or used to make jam, sauces, pies, crumbles and juice. Rhubarb is also recognized for some medicinal effects (courtesy Isis Gagnon-Grenier).

Rhubarb (genus Rheum) is a common name for about 50 species of cool-season herbaceous perennial plants belonging to the buckwheat family and originating in central Asia. Common rhubarb (R. rhabarbarum or R. rhaponticum) was probably the first to be cultivated, initially as a source of purgative drugs from the powdered root. It was established as a food plant in Europe in the mid-18th century and now grows throughout Canada. Considerable hybridization has occurred to produce the present commercial cultivars. Leaves are poisonous; the edible portion is the elongated petiole (leafstalk), which may be harvested for immediate use or for processing (canning, freezing, pie filling). Dormant plants may be dug in early winter for "forcing" in heated, darkened buildings, where the delicate petioles are produced. Forced rhubarb is grown commercially in Ontario.