Derek Porter with the silver medal he won in single sculling at the Atlanta Olympic Games (courtesy Maclean's). 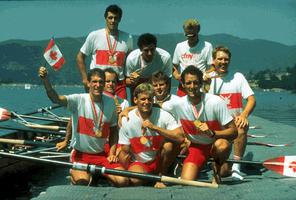 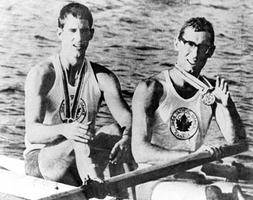 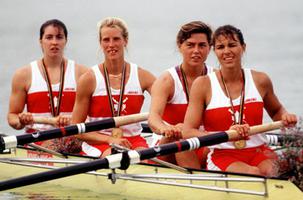 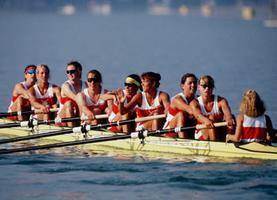 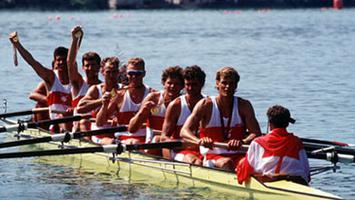 Canada's Marnie McBean (left) and Kathleen Heddle (right) at the 1992 Barcelona Olympics. The pair won a gold medal in pairs and joined up with the women's eights to win a second gold medal (photo by F.S. Grant, courtesy CP Archives). 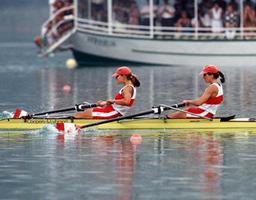 The UBC Fours, following their gold-medal performance at the 1956 Melbourne Olympics. The team of Don Arnold, Walter d'Hondt, Lorne Loomer and Archie MacKinnon, all UBC students, achieved the largest victory margin of any crew in the modern games (courtesy Canada's Sports Hall of Fame, www.sportshall.ca). 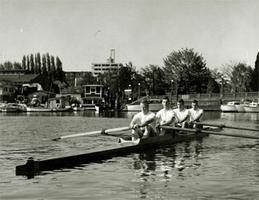 Rowing is a water sport which uses oars to propel boats or specially designed racing shells. Shells are usually classified for either sculling (two oars or sculls, one in each hand) or rowing (one oar, held by both hands). Sculling shells include the single, double, and quadruple, used by one, two, and four people respectively. Rowing shells include the pair (with or without coxswain), four (with or without coxswain) and eight (with coxswain).

With hulls less than three millimetres thick, racing shells are lightweight and slender--but strong--craft; they are commonly made of mahogany, cedar, fibreglass, or carbon fibre, with frames of lightweight hardwood. Shells are equipped with sliding seats and "shoes" attached firmly to the frame; these allow the seated rower to slide forward into a powerful crouch position at the start of the stroke. Oars vary in length, weight, and blade design, depending on their use (rowing or sculling), the strength and size of the rower, and individual preference.

Rowing as a sport has a long history, and there are artistic and written representations linking the sport to ancient Greece, Rome, and Egypt. England, however, was the birthplace of modern rowing equipment and regattas as we know them today. Perhaps the oldest sculling race was instituted on the Thames River in 1715 by the Irish comedian Thomas Doggett. The sport was introduced to Canada gradually as the English immigrated to North America.

One of the earliest recorded races in Canada occurred 10 August 1816 in St John's harbour, Nfld. The ROYAL ST JOHN'S REGATTA, perhaps the oldest continuous sporting event in North America, commenced in 1818 at Quidi Vidi Lake and is still rowed in fixed-slide, six-man boats that are considerably heavier and slower than the swift racing shells used today in national and international competitions. In the 1820s, the rowing clubs of Halifax-comprising mainly garrison and naval personnel-dominated maritime regattas.

In the 1840s, rowing clubs and regattas appeared in the Upper Canada communities of Toronto, Brockville, Monkton, and Cobourg. By this time, Canadian oarsmen were competing against British and American oarsmen in regattas in Halifax, Toronto, Boston, Philadelphia, Chicago, and other centres. By the end of the 19th century, a number of Canadian scullers and crews had gained international fame in both amateur and professional competition.

In 1882 the Royal Canadian Henley Regatta was established; named for the famous British regatta, it is the premier regatta in North America, and has been held at St Catharines, Ont, for over 100 years. The courses at St Catharines, Burnaby Lake, BC, and the Olympic Rowing Basin in Montréal are rated as international-class courses; however, Canadian clubs from Vancouver to Newfoundland row on any type of water, including rivers, lakes, and ocean inlets.

In 1880 the Canadian Association for Amateur Oarsmen was created, one of the earliest governing bodies in Canadian sport. Made up of clubs from across Canada, the association--now known as Rowing Canada Aviron--is responsible for the rules governing Canadian rowing. Since 1974, it has staged national championships for men, women, lightweights, youths, and masters. The association head office is located in Victoria, BC.

Canadians have achieved considerable success in international rowing competition. In the 1860s and 1870s, George Brown, a fisherman of Herring Cove, NS, raced successfully against the best scullers in Canada, the US, and Britain. Four oarsmen from Saint John, NB (George Price, Elijah Ross, Samuel Hutton, and Robert Fulton), won Canada's first world championship on 7 July 1867 in Paris, France, and were afterwards called the "Paris Crew." In the 1870s and 1880s, Toronto sculler Edward (Ned) HANLAN won Canadian, American, and English titles, including seven all-comers matches that were the equivalent of world championships. He has been Canada's most acclaimed oarsman and was widely hailed as Canada's first national sporting hero.

Other Canadian greats of the late 19th and early 20th centuries include Jake Gaudaur, of Orillia, Ont, who won the world sculling title in 1896; Toronto sculler Lou Scholes, who won the Diamond Sculls in 1904; and Joseph WRIGHT, Sr, of Villanova, Ont, an Olympic medallist and one of the most famous oarsmen and rowing coaches of the period. In the 1930s, Robert "Bobby" Pearce, dominated the single sculls; an Australian who immigrated to Canada in 1930, he won gold medals for Australia at the 1928 and 1932 OLYMPICS, as well as numerous titles as a Canadian, including his first world championship in 1933.

In the 1950s and 1960s, a number of Canadian crews rowed to international victory. Under the leadership of world-class coach Frank Read, the Vancouver Rowing Club (established in 1888) produced a number of different crews which won numerous international victories between 1954 and 1960, including COMMONWEALTH and PAN-AMERICAN GAMES gold medals and three Olympic medals: one gold and two silver. The 1956 Olympic gold-medal four of Don Arnold, Walter d'Hondt, Lorne Loomer, and Archie MacKinnon (all students at the University of British Columbia) achieved probably the largest victory margin of any crew in the modern games. In 1960, another crew from Vancouver won the Olympic silver medal in the eights.

At the 1964 Olympics, Roger Jackson and George Hungerford from the UBC-Vancouver Rowing Club won the gold medal in the pairs competition. The winning pair was coached by two disciples of Read: Glen Mervin, from the 1960 Olympic silver-medal eight--and David Gillanders, who assisted Read for many years.

At the 1984 Olympic Games in Los Angeles, the Canadian team won six medals. For the first time in Canadian Olympic history the men's eight-oared crew (Patrick Turner, Kevin Neufeld, Mark Evans, Grant Main, Paul Steele, J. Michael Evans, Dean Crawford, Blair Horn, and Brian McMahon), coached by Neil Campbell, won the gold medal in a classic stroke-for-stroke duel with the US crew. Olympic silver medals were won in both the women's coxed four and the pair without coxswain (Tricia Smith and Betty Craig). Bronze medals were won by Robert Mills in the men's single, by the men's quadruple sculls, and by Daniele and Silken LAUMANN in the women's double sculls.

In 1985 the men's quadruple sculls of Doug Hamilton, Paul Douma, Bob Mills, and Mel Laforme won Canada's first sculling world championship, beating a strong East German crew. A poor showing by the entire rowing team at the 1988 Olympics in Seoul gave new force and direction to the team. In 1990 Canada produced a gold, two silvers, and a bronze medal at the world championships. In 1991 Canadian rowing emerged as a dominant power. The women's fours without cox repeated their gold medal from the year before. Silken Laumann became the world champion sculler after earning silver in 1990. The women's eights with cox and coxless pair also won world championships. The men's eights won the silver for the second year in a row.

At the 1999 world championships, Emma Robinson and Theresa Luke won the title in the women's coxless pairs. At the 2000 Sydney Olympics, they earned a fourth-place finish in the event; the women's eight (of which they were also members) won a bronze medal--the only Olympic medal for the Canadian rowing team at the Games..

The Canadian team spent much of the first decade of the 21st century training young rowers and rebuilding, while Canadian rowers continued to place regularly in the medals and in the top ten. At the Athens Olympics in 2004 the men's fours rowing team (Cameron Baerg, Jake Wetzel, Thomas Herschmiller, and Barney Williams) won silver.