Sackville, NB, incorporated as a town in 1903, population 5558 (2011c), 5411 (2006c). Sackville is situated 50 km southeast of Moncton on the Tantramar River, near the Nova Scotia border. Best known as the home of MOUNT ALLISON UNIVERSITY (founded in 1839), Sackville overlooks the wide expanse of the TANTRAMAR MARSH, which inspired the poetry of its most famous son, Sir Charles G.D. ROBERTS. It has become home to a wide range of artists, from musicians, to poets, writers, painters and print makers. The area was first settled in the 1670s by the ACADIANS, who built dikes to reclaim its rich farmland from the sea. After the Expulsion of 1755, these lands were taken up by immigrants from New England and Yorkshire, England. The township (incorporated in 1762) and subsequently the town was named after Lord George Sackville, commander of the British forces. 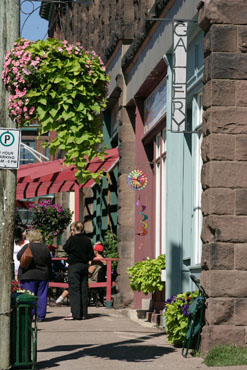 By the mid-19th century, Sackville was a thriving port, with local shipbuilders supplying the sailing vessels needed to send farm produce, lumber and grind stones to markets in Britain, the West Indies and the United States. Construction of the INTERCOLONIAL RAILWAY through the town (1870) bolstered its position as a commercial centre. With the end of the age of sail in the Maritimes after 1900 and a rerouting of the Tantramar River (circa 1920), the port closed.

One of its early industries, a large stove foundry established in the mid-1800s as 2 separate foundries (1852 and 1872) before merging in 1984, was still in operation until burning down in 2012. Major employers include the university and Moneris Solutions, a processor of debit and credit transactions. Sackville is a town of fine old homes and tree-shaded streets, overlooked by the red sandstone buildings of the university. A large waterfowl park and Sackville's many festivals attract tourists.