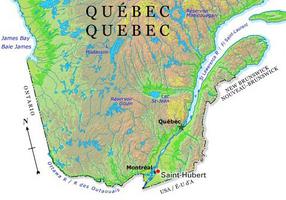 Saint-Hubert, Qué, Borough, pop 77 028 (2006c), 75 912 (2001c). Saint-Hubert is a borough of the new city of LONGUEUIL, created by the amalgamation of 8 distinct municipalities in 2002. It is located 13 km east of MONTRÉAL. Saint-Hubert was originally set up as a municipality in 1860 and then as a city in 1958. In 1971 it merged with the city of Laflèche (incorporated 1959) to form a new city of Saint-Hubert. The name recalls the Roman Catholic mission church of Saint-Hubert, set up as a parish in 1862, which was named after an 8th century Belgian bishop. Laflèche was a successor to Mackayville, established in 1947.

Much more than a residential suburb of Montréal, Saint-Hubert harbours 4 large industrial parks. It is also the site of a major regional airport (an offshoot of the Saint-Hubert Air Forces Base), the CANADIAN SPACE AGENCY, as well as a technological institute and a college specialized in the fields of aeronautics and flying instruction. In 1995 the federal government shut down the Saint-Hubert Canadian armed forces base. Since then, the site has been converted to accommodate housing and industries.